Adding AutoImages to a counter

AutoImages can be used in counters in two ways, either as a stand-alone image layer, or as a level image in a Layer trait.

An AutoImage trait is a trait that just draws the name image definition. AutoImage follows all the normal rules of VASSAL property traits. It is affected by other traits below it on the list and is drawn over the top of anything drawn by traits above it on the list.


This is the simplest and most straight-forward way of using AutoImages. It is ideal for counters that either do not have a flip side, or have a flip side that is not another AutoImage. (Add the flip side using a Layer trait).


To add an AutoImage trait to a counter: 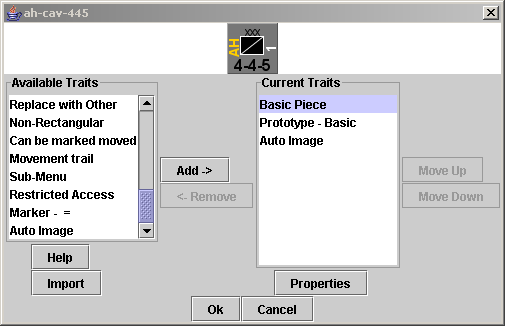 Using an AutoImage as a Level Image in a Layer trait

If you wish to have a counter that has multiple layers, more than one of which is an AutoImage, you will need to use the folowing method to use AutoImage's in layers. While being easy to do, it is not intuitively obvious and you cannot see what the image looks like inside the layer trait. 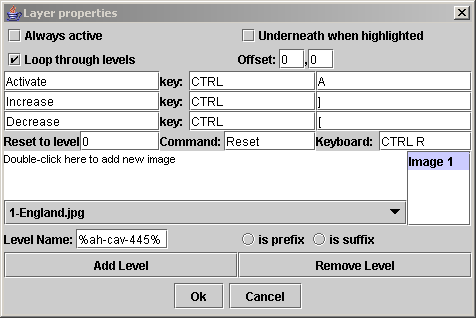 Retrieved from "https://vassalengine.org/w/index.php?title=Ai_ref_counters&oldid=4243"
Category:
This page was last edited on 29 May 2010, at 17:11.
This page has been accessed 49 times.
Content is available under Creative Commons Attribution-ShareAlike unless otherwise noted.
Privacy policy
About Vassal
Disclaimers