How to activate selected units that match a randomly drawn chit

The Devil's Cauldron contains an interesting command structure. Each unit in the game belongs to a specific formation. Each formation has a specified leader counter and a matching Activation chit. Activations chits for all formations from both sides are randomly drawn from a Deck to determine the order of play. When the Activation Chit for a formation is drawn, then the leader and all units that belong to that formation are automatically 'activated' by displaying a yellow highlighting layer. This makes them easy to find on a busy mapboard. As each unit is moved, or given a command, then the yellow layer turns to Green to indicate that its turn has ended. A toolbar button deactivates all units at then of the turn.

The first stage is to store the name of the formation in the Activation chit and each of the counters belonging to the formation. I use Prototypes for this. For the 1st Parachute Brigade, 1st Airbourne Division, the prototype is named '1AB-1st Para Brigade' and just includes the single Marker trait with the marker named Formation equal to '1st Para Brigade':

Then, then we add the '1AB-1st Para Brigade' prototype to the 1 Para Activation Chit, the 1 Para leader (Brig. Lathbury) and each of the 1 Para units: 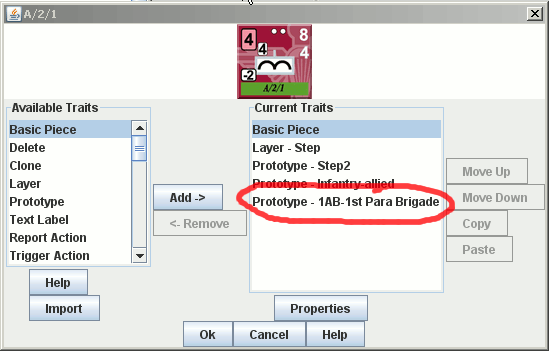 The two highlight images are setup as 2 seperate layers in a prototype named 'canActivate'. Each layer is always active, but contains a transparent image for the first level and the highlight image as the second level. The 'canActivate' prototype is added to each 1 Para unit through the Protoype chain


and to the leader through 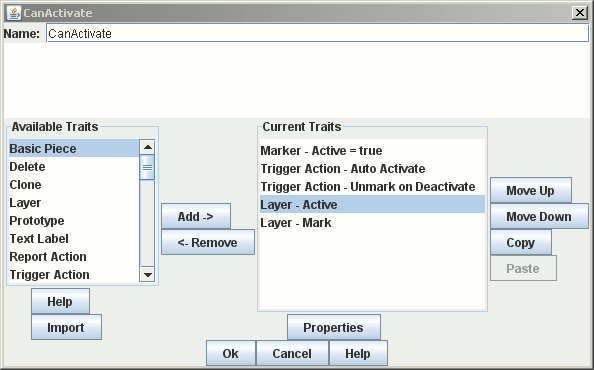 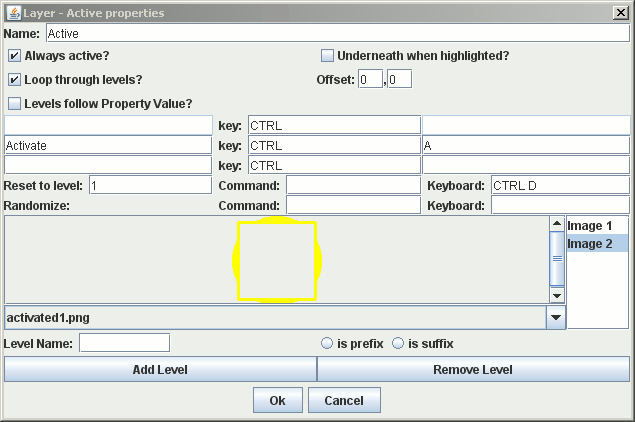 Each Activation chit contains the Chit protoype which has a Global Key Command to Activate all highlight layers in units that have the same Formation marker. Here is the protoype: 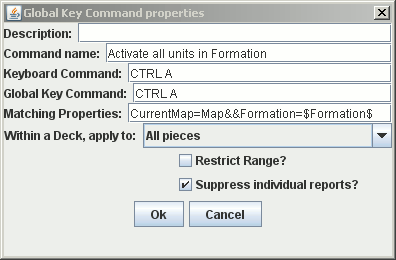 The key to this working is the Matching Properties string:

Putting it all together

So the complete sequence runs:

Retrieved from "https://vassalengine.org/w/index.php?title=How_to_activate_selected_units_that_match_a_randomly_drawn_chit&oldid=15211"
Category:
This page was last edited on 31 July 2010, at 13:56.
Content is available under Creative Commons Attribution-ShareAlike unless otherwise noted.
This page has been accessed 438 times.
Privacy policy
About Vassal
Disclaimers