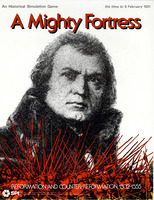 A Mighty Fortress is a classic SPI hex'n'counters wargame. A Mighty Fortress simulates the conditions, which made possible the spread of the Lutheran Reformation and the subsequent Catholic reaction (the Counter-Reformation) in the years 1532-1555. The game recreates the actual historical objectives of the major countries in Europe in the Sixteenth Century as well as their military strengths and resources. There are six players in the game representing the six major countries, England, France, the Ottoman Empire, the Hapsburgs, the Pope, and the collection of German states we will call The Lutherans. Boardgamegeek https://boardgamegeek.com/boardgame/2666/mighty-fortress

Retrieved from "https://vassalengine.org/w/index.php?title=Module:A_Mighty_Fortress&oldid=65928"
Categories:
This page was last edited on 10 March 2021, at 22:51.
Content is available under Creative Commons Attribution-ShareAlike unless otherwise noted.
This page has been accessed 1,407 times.
Privacy policy
About Vassal
Disclaimers