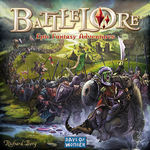 Module version 3.2 has been uploaded. It contains a bug fix which stops cards being placed onto the Battle map when pressing the 'End Turn' button.

Module version 3.1 has been uploaded. It contains improvements and bug fixes.

To commemorate the 5th anniversary of Battlelore's release, I (LurchBrick) am proud to announce the release of the Battlelore Vassal module, version 3.0. which can also be found here

My thanks to all the previous maintainers of the BattleLore module whose framework I built upon and to Todd Rewoldt and Dan Cavaliere for helping to create the scenarios.

Copy of post from Sultan on the DOW site:

I just wanted to give folks a heads up, and something to look forward to for the upcoming new year.

After talking with Bill Bennett (creator of the VASSAL module for BattleLore), he has handed off development to me. He has a lot of other module development work in the pipeline, and I'm a frequent BL Vassal player that wants to improve a lot of things with the module as well as add all the expansions. I am in the process of redesigning the module from the ground up. The new module will include the following:

Timing is a little in flux right now, but I think I will have a beta version ready sometime in the next 2 months (perhaps earlier, or perhaps later depending on how the free time goes)

Retrieved from "https://vassalengine.org/w/index.php?title=Module:BattleLore&oldid=68683"
Categories:
This page was last edited on 25 September 2021, at 13:43.
Content is available under Creative Commons Attribution-ShareAlike unless otherwise noted.
This page has been accessed 769 times.
Privacy policy
About Vassal
Disclaimers