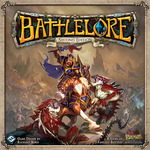 BattleLore (second edition) - A Game of Fantasy Battles published by Fantasy Flight Games (FFG) and designed by Richard Borg and Robert A. Kouba

This module is intended as a gaming aid for players owning a physical copy of the game. As such it does not contain any rule booklet nor rule reference, Unit Cards, Scenario Cards and Deployment cards.

Before starting an online game remember that:

This module offers a kind of pseudo-3D vibe, for both figures and dice. Be sure to check out the in-game Tutorial for some tips on how best to use the module. Scenario cards have been redacted to ensure players own a physical copy of the game.

Retrieved from "https://vassalengine.org/w/index.php?title=Module:BattleLore_(Second_Edition)&oldid=61094"
Categories:
This page was last edited on 24 July 2020, at 23:29.
Content is available under Creative Commons Attribution-ShareAlike unless otherwise noted.
This page has been accessed 918 times.
Privacy policy
About Vassal
Disclaimers