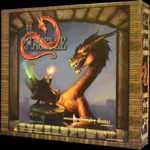 Creation of the Chaostle module; only the games documents have been uploaded so far. The core components of the game are being developed for Vassal gameplay still. I will keep this section updated as the progress of the Module gets updated!

I received approval to work on this module by Mark Jacobs of Chivalry Games (creator of Chaostle); verification email available upon request.

Chaostle (kay'os'l) is a combination of the words Chaos and Castle. Chaostle is a three-dimensional castle fantasy board game. Each player selects their starting armies (usually 3 for a 2 player game) that they will use to battle against their enemies, in an attempt to conquer the castle for their King or Queen. The armies consist of many different fantasy fighters with unique skills and weaknesses. These fighters come in the form of fantasy characters such as wizards, dragons, unicorns, knights, archers, etc.

Chaostle is a unique game in that it combines the fun of tabletop miniatures gaming and conventional board games. The structured multi-level castle game board provides many levels of strategy. The simplified and exciting battle system allows this game to be enjoyed by heavy game players as well as those who are new to miniature games.

Chaostle has many levels of strategy, from picking your starting characters, to moving throughout the multi-level castle towards victory. A game with pure strategy, however, would be just another chess game and not like real life where nothing ever goes as planned. Therefore, Chaostle has many fates that constantly effect the game, ranging from mild setbacks to cataclysmic earthquakes. These unpredictable twists of fate can be either from the card of happiness or the card of doom.

Chaostle features three-dimensional castle walls that are secured onto the game board. The fantasy fighters can move any direction throughout the castle including up and down stairways to change levels. The game comes standard with sixteen miniature characters. Each character has a battle card containing the character's statistics, weapons, special skills and upgrades. The battle cards have holes where pegs are inserted to allow for easy tracking of the statistics and upgrades.

The object of the game is to move your character around the board, while your opponent attempts to do the same but in the opposite direction. When the characters are close enough, they can battle (sometimes to the death) or they can maneuver around the opponent using one of the three levels of the castle. When the players make it around the castle, they can begin a battle against the gates of the castle. When the castle is destroyed by one player, the castle is destroyed for all players...first player to get 2 of their 3 character's into the center of the castle (Sanctuary) they win! For full details of how the game is played, please read the instructions document. Example: The number of character's per person can vary, even for a two player game.

My goal is, after the module is working and complete, to make a tutorial video to help new players of the game, as the rules can sometimes be left up to interpretation.

Retrieved from "https://vassalengine.org/w/index.php?title=Module:Chaostle&oldid=61201"
Categories:
This page was last edited on 25 July 2020, at 00:06.
Content is available under Creative Commons Attribution-ShareAlike unless otherwise noted.
This page has been accessed 347 times.
Privacy policy
About Vassal
Disclaimers