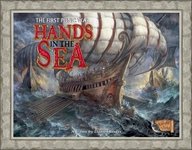 There are two versions of this module. When playing, be SURE that you are using the same version as your opponent. The LIVE version was designed with live play in mind. It is extremely automated. Every move is described in the narrative box and the module automatically carries out multiple steps to speed up play and reduce errors. It was developed over 3 years, but with all of the card interactions, there is a chance that there is a bug somewhere. Before starting a new game, come here and see if there is a newer version. Before using this module, go through the READ ME tabs and get familiar with the module. The PBEM version has almost no automation. It is for e-mail play between two players who know the game very well. Update to 1.2: Bug discovered that when Rome raids a Carthaginian development, the total raided developments does not increase. It can be overrode manually, but this version corrects the bug.

Retrieved from "https://vassalengine.org/w/index.php?title=Module:Hands_in_the_Sea&oldid=61454"
Categories:
This page was last edited on 25 July 2020, at 17:15.
Content is available under Creative Commons Attribution-ShareAlike unless otherwise noted.
This page has been accessed 497 times.
Privacy policy
About Vassal
Disclaimers