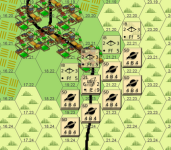 ITACS or Improved Tactical System is a hex-and- counter wargaming system which simulates tactical battles from the earliest times until the end of the 16th Century. It is designed to include some of the flexibility of miniatures style games along with the ease of use and faster gameplay of the hex based wargaming world.

ITACS has been inspired by various tactical warfare games covering the period from ancient to early modern times.

ITACS contains a number of rules including the basic movement and combat rules, terrain effects, leadership, morale, etc. There are also scenarios for ITACS, each of which may contain scenario specific rules that apply only to that scenario.

ITACS is designed to be played online using the VASSAL game system, although players may choose to print out copies of the counters and maps should they so choose, and play face to face.

Game pieces and maps from other tactical games can also be used to play ITACS. You may also create your own counters and maps as well as any number of scenarios to use these maps.

The game rules and standard VASSAL module file may be freely distributed under the Creative Commons Attribution 4.0 International (CC BY 4.0) license. This license may be seen here: https://creativecommons.org/licenses/by/4.0/

The game images in these rules are for example purposes only. You may create or adapt your own counters or maps for use in this game.

You may print copies of the game rules, game counters, and game maps for use in face to face play if you wish. No royalties are required for printing the game rules and maps for your own use.

The latest version of the game including the VASSAL module file, rules, scenarios etc can be found here:

Completed the rules and added a lot more scenarios. To avoid bloat in the module file I have split the module into 3 separate modules covering Ancients (including Greece and Rome), Medieval (Europe from the end of the Western Empire in 476 through to 1600) and Asia.

Retrieved from "https://vassalengine.org/w/index.php?title=Module:ITACS&oldid=61525"
Categories:
This page was last edited on 25 July 2020, at 20:27.
Content is available under Creative Commons Attribution-ShareAlike unless otherwise noted.
This page has been accessed 634 times.
Privacy policy
About Vassal
Disclaimers