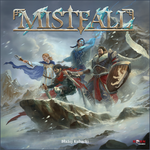 Mistfall is a fully co-operative adventure game set in a fantasy world of mystery, eldritch powers and high adventure.

At the start of the game each player chooses a hero with a fixed deck of equipment and power cards, before embarking on a dangerous journey through a set of monster-ridden locations. Each hero also comes with a pool of advanced abilities that can be added to their basic deck during the game to customize and expand their powers. A variable board setup, randomized encounters and enemies, a simple but robust monster AI – all that makes for a game that is a varied and challenging experience both solitaire as well as with a group of up to three friends.

Gather up your resolve, check your gear and get ready to brave the unrelenting Mists. A world of perilous adventures awaits!

Version 1.0 This is the first draft of a Vassal module for the Adventure Game "Mistfall". It also includes the Expansion Heart of the Mists

Update of Version 1.0: some minor fixes and added the Heart of the Mist Rulebook.

© 2015 NSKN Games. All rights reserved. Included by permission of the publisher

Retrieved from "https://vassalengine.org/w/index.php?title=Module:Mistfall&oldid=71328"
Categories:
This page was last edited on 25 May 2022, at 07:06.
Content is available under Creative Commons Attribution-ShareAlike unless otherwise noted.
This page has been accessed 756 times.
Privacy policy
About Vassal
Disclaimers