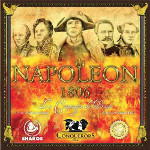 Description: Napoleon 1806 is a game at the crossroads of history and simulation, the culmination of two history and wargame enthusiasts, Denis Sauvage and Julien Busson, who wished to share this passion with you. With Napoleon 1806, in 1 to 2 hours, two players will relive the clashes between Prussian and French at the heart of the imperial conquests of Napoleon the 1st, which culminated in the battles of Auerstaedt and Jena.

Napoleon 1806 is intended for wargaming seasoned grognards as well as for young conscripts who want to try a new playful sensation. Strategy, anticipation and decision are the engines of the Napoleon 1806 game system.

Will you meet the challenge of doing as well as the Emperor Napoleon or will you succeed in thwarting his plans at the head of the Prussian forces?

The module is posted with the kind authorization of Denis Sauvage from Shakos.

Version 1.1 corrects the Vassal error when drawing the last card from draw decks.

Version 1.2 adds the names of main locations on map (thanks to Dan for this improvement) and corrects the behaviour of the color cubes on the roster sheets.

Retrieved from "https://vassalengine.org/w/index.php?title=Module:Napoléon_1806&oldid=67961"
Categories:
This page was last edited on 14 July 2021, at 12:11.
This page has been accessed 573 times.
Content is available under Creative Commons Attribution-ShareAlike unless otherwise noted.
Privacy policy
About Vassal
Disclaimers