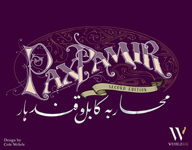 Please refer to the html help file included in the module for more information, but to get started:

0. Players should choose or be assigned their colours in chat first.

2. Select the player colours in the game, Wakhan and other options if required, then click set up.

A button on the Main Map toolbar can be used to automate end of turn cleanup.

Rule and dominance is automatically calculated and indicated. Ruler tokens are not displayed when no-one rules.

All pieces in the game have context-sensitive right-click menu options.

Retrieved from "https://vassalengine.org/w/index.php?title=Module:Pax_Pamir_(Second_Edition)&oldid=72273"
Categories:
This page was last edited on 29 September 2022, at 23:53.
Content is available under Creative Commons Attribution-ShareAlike unless otherwise noted.
This page has been accessed 3,625 times.
Privacy policy
About Vassal
Disclaimers