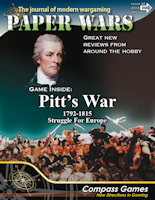 Pitt’s War simulates the epic struggle between United Kingdom and France from the beginning of the French Revolution to the end of the French Empire at Waterloo on a map with zones covering Europe and the Levant. Each turn is worth a year with a fair and a bad weather impulse. Combat units are multi step historical armies with elite corps and main generals. And much more, the game provides round 130 event markers to simulate easily the essence of that period.

Retrieved from "https://vassalengine.org/w/index.php?title=Module:Pitt%27s_War&oldid=71033"
Categories:
This page was last edited on 17 April 2022, at 16:54.
This page has been accessed 491 times.
Content is available under Creative Commons Attribution-ShareAlike unless otherwise noted.
Privacy policy
About Vassal
Disclaimers