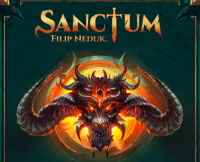 Sanctum is a competitive strategy game inspired by hack-and-slash RPG video games. Each player controls one of four unique characters as they journey into the heart of the fallen city of Sanctum, building up their skills and arsenals along the way to prepare for the final fight against the Demon Lord.

Version 1.1 several bug fixes -The dancer's abilities don't flip, with exception of "double strike" -instead Outlaw and Slayer player board, appear the Huntress board, and also the abilities are the ones of Huntress

Version 1.0 This is the first version of a fan made Vassal module for "Sanctum".

© 2019 Czech Games Edition. All rights reserved. Included by permission of the publisher.

Retrieved from "https://vassalengine.org/w/index.php?title=Module:Sanctum&oldid=65947"
Categories:
This page was last edited on 11 March 2021, at 09:28.
This page has been accessed 287 times.
Content is available under Creative Commons Attribution-ShareAlike unless otherwise noted.
Privacy policy
About Vassal
Disclaimers