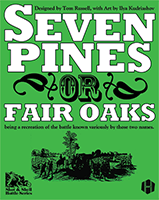 The SHOT & SHELL BATTLE SERIES recreates battles fought during the mid-nineteenth century at the brigade level. Each brigade is represented by an ID counter and several Step Counters so as to model the gradual attrition of combat strength over the course of a day's fighting. Divisions are Activated in alternating impulses, with each Activation (or Elimination) degrading its ability to activate and coordinate with your other Divisions. The game is of moderate complexity, with five kinds of combat and three kinds of Intrenchments, but play is quick and relatively streamlined.

The first game in the series, SEVEN PINES; OR, FAIR OAKS, recreates the actions fought on May 31 and June 1 of 1862 during the American Civil War. A complex Confederate battle plan hatched by Joseph E. Johnston that called for coordinated flank attacks devolved into an unsupported frontal assault, resulting in the largest battle of the war up until that time, and one of the bloodiest. Beyond the historical scenario, there are scenarios which allow players to explore the feasibility of Johnston's actual plan, as well as what might have resulted had he been opposed by a more aggressive Union general than George B. McClellan.

There are special rules for crossing a swollen river over a soon-to-be-collapsed bridge, the strange case of General Casey's Division (whose conduct was either heroic or disgraceful, depending on who you were talking to), and the command confusion that beset both sides. But at its heart, it is a simple and straightforward game that provides an excellent opportunity to explore this exciting new system.

Please go through the scenario specific rules to complete setup. The Divisions needed for each scenario are already on- or besides the map (stacked). Each player still needs to deploy the brigades per scenario rules. The Scenario- and Series Rulebook are provided inside the module under their respective buttons on the toolbar.

The 'step counters' from the physical version are represented by the green squares next to the counters, you can either right-click a counter to adjust a step or use ctrl + up arrow/down arrow to go through the steps. All steps are also provived for the disrupted- or limbered side of the counters. Elan, intrenchment and charge-markers can be added on right-click or with a keyboard shortcut.

Retrieved from "https://vassalengine.org/w/index.php?title=Module:Seven_Pines;_or,_Fair_Oaks&oldid=66959"
Categories:
This page was last edited on 13 April 2021, at 00:46.
Content is available under Creative Commons Attribution-ShareAlike unless otherwise noted.
This page has been accessed 278 times.
Privacy policy
About Vassal
Disclaimers