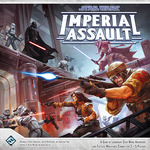 Imperial Assault (the Campaign Mode, not the Skirmish Mode), produced by Fantasy Flight Games. As always, users must buy a physical copy of any game they play on Vassal. You absolutely need a physical copy of the game to be able to play the campaign. You will need the Rules, the appropriate Campaign Book and any side mission campaign sheets you want to include as agenda sets or ally missions.

The version 1.13 includes Waves 1 - 11 (all releases upto and including wave 11), along with their associated Ally/Villain packs. I will update this module as new content is released. The module also includes FOR A FEW MORE CREDITS: Fanmade Scum Campaign for Imperial Assault by Darth Jawa, including the second part Once Upon a Time in the Western Rim.

The save file Media:Imperial_Assault_-_Campaign_1.11_cc.vsav is configured for the core campaign and includes pre-built maps for all missions. Most missions also have initial deployments.

Read the HTML help file, which is also included in the module. It contains a lot of useful information, although it does not yet contain all of the tricks and tips on how to set up things for a campaign. The help file also tells how to configure decks for other than the core campaign. See The Imperial Assault Campaign module discussion thread on BoardGameGeek for more information about the changes and usage.

NOTE: since Version 1.3 the campaign module uses a new dice rolling window, the same as the Skirmish Module.

NOTE: since Version 1.7 the campaign module includes Redjak's Automated Imperial Variant (RAIV for short) for solo play (up to wave 8). Version 1.13 updated this to RAIV Extended and includes all imperial groups and missions. See the help file on how to use and setup and the RAIV Extended Discussion Thread on BoardGameGeek for links to the rules.

Skirmish Imperial Assault (the Skirmish Mode, not the Campaign Mode), produced by Fantasy Flight Games. As always, users must buy a physical copy of any game they play on Vassal. The current version (11.0) includes Waves 1 - 11 (all releases up to wave 11), along with their associated Ally/Villain packs. I will update this module as new content is released.

PLEASE NOTE: Versions 4.0 and onward use a new (and massively upgraded!) method for rolling dice. I basically copied and adjusted the main code from the excellent X-Wing Miniatures mod so that the dice-rolling mechanic now works far better than it did before.

Here is an instructional YouTube video showing how to set up and play the module.

Retrieved from "https://vassalengine.org/w/index.php?title=Module:Star_Wars:_Imperial_Assault&oldid=71122"
Categories:
This page was last edited on 27 April 2022, at 18:08.
Content is available under Creative Commons Attribution-ShareAlike unless otherwise noted.
This page has been accessed 3,688 times.
Privacy policy
About Vassal
Disclaimers