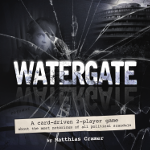 In Watergate, one player assumes the role of a Newspaper Editor, while the other embodies the Nixon Administration – each with a unique set of cards. To win, the Nixon Administration must build up enough momentum to make it to the end of the term, whereas the Editor must gather enough evidence to connect two informants directly to the President. Of course, the administration will do all in its power to smother that evidence. Can the secret source known as "Deep Throat“ tip the scales? A thrilling race against time begins... [Publisher's description]

Retrieved from "https://vassalengine.org/w/index.php?title=Module:Watergate&oldid=61910"
Categories:
This page was last edited on 25 July 2020, at 23:45.
Content is available under Creative Commons Attribution-ShareAlike unless otherwise noted.
This page has been accessed 602 times.
Privacy policy
About Vassal
Disclaimers