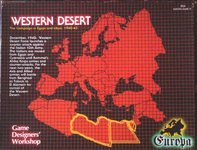 Version 1.3 notes (RWeston) Minor edits only. Fortunately, save files from versions 1.1 and 1.2 are compatible with this version. Just open them and save to update to version 1.3.

2. Setup module file to make it easier to add new extensions for optional rules/changes/scenarios from The Europa Magazine (TEM).

I hope everyone enjoys the module. The Western Desert game was one of the best in the Europa series. If anyone has any suggestions or if looking for a game of Western Desert, then let me know.

2. Added the optional units from TEN 8, TEN 9 (counters only), and TEM 14. As part of this, added a second breakdown chart for the Italian 101 and 102 Infantry/Motorized Infantry Divisions and the 131, 132, and 133 Italian Armored Divisions.

3. Added a game setup for the "Operation Crusader" scenario from TEM 31.

4. Added a game setup for the "Desert Cauldron" scenario from TEM 36.

5. Added a game setup for the "El Alamein" Demonstration Battle from TEM 28. As part of this, I added revised NZ 2nd Infantry Division and NZ 5th Infantry Brigade counters. During the First Battle of El Alamein, the NZ 4th Infantry Brigade was shattered and took no further part in the North Africa Campaign. It eventually became the NZ 4th Armored Brigade. The NZ 2nd Infantry Division fought as a 2 brigade division for the rest of the campaign in North Africa.

Desert Tracks extension file (RWeston) Added desert tracks, from TEM #15, to the Western Desert map. Desert tracks reduce the SMP penalty for off road movement from 3 times the combat/motorized MP cost of the terrain to 2 times. This means that entering a hex of clear terrain or crossing a wadi, when moving along a track, will only cost 2 SMPs, not 3. In addition, combat units moving thru rough or sand terrain or crossing wadis or escarpments along a track, pay a reduced MP cost per the Desert Tracks TEC.

1. There is a Tracks button on the menu bar to make the tracks invisible/visible.

2. Added a Desert Tracks TEC to the game charts.

3. Added a game setup for the Campaign Game with desert tracks included.

4. Added a game setup for the "Enter Rommel" scenario, also from TEM # 15. Desert tracks are a recommended optional rule for this scenario.

Version 1.2 notes (RWeston) Minor edits only. Fortunately, save files from version 1.1 are compatible with this version. Just open them and save to update to version 1.2.

1. Cleaned up map to correct problems from when map was assembled from scans. Many water hexes were mis-numbered.

Version 1.1 notes (RWeston) After some play-testing, I have made more improvements to the module. Unfortunately, the save files from this version are not compatible with previous versions.

1. Fixed automated aircraft repair function for Allies for July 1942 and later when air repair occurs on die roll of 1, 2, 3, or 4.

2. Added Vichy Neutrality marker below the Vichy Table to keep track of neutrality status of Vichy Levant. This was needed to correct the automated Vichy Status function. Needed to account for -1 modifier when Allies invade the Levant. Players need to remember that they cannot start rolling until the April I 1941 turn or the Allies invade the Levant, whichever comes first.

3. Added automatic Malta Table routine. Place units, replacements, and supply steps in the Europe Holding Box and then select the Resolve Malta Table (ALT CTRL M) option to resolve all effects. Units will be placed in the applicable Shipped, Returned, and Eliminated boxes, depending on the results.

Version 1.0 notes (RWeston) Summary of all of the changes between version 0.4 and version 1.0

2. To eliminate the need to open additional windows so often, I made extensive changes to the map and charts: (a.) The Scraped/Dead Unit Piles has been moved to the same chart as the new Victory Points(VPs) Track with preset markers, making it easier to count the unit loss VPs at the end of the game. On this chart, I added an item from the rules that was missing from the list of all methods of gaining or losing VPs. (b.) The Allied and Axis Game Charts now only contain the Unit Organization boxes. (c.) The Game Turn tracks, Allied and Axis Replacement Point tracks, and the new Malta Status track have all been added to the map and all have preset markers. (d.) The Allied, Italian, and German Replacement Pools have all been moved to the map. (e.) The Allied Forces in Greece and the new Allied Withdrawals Holding Boxes have been placed on the map. (f.) The Tripolitani Garrison box is placed on the map and a unit command has been added to the units in this box to move the units to the map for deployment. (g.) The Italian 5th Army units can now be randomly drawn into the 5th Army box and a unit command can be used to deploy the units to Tripoli. (h.) A new Europe Holding Box has been added to the map to place new German and Italian reinforcements and units turned back on previous turns by the Malta Table. (i.) All of the applicable Allied tables, tracks, and holding boxes have been placed in the bottom right corner and all of the applicable German and Italian tables, tracks, and holding boxes have been placed in the top left of the map for maximum efficiency.

3. Have made many new markers and have improved many existing markers: (a.) I have added the air field capacity to the airfield markers so there is no need for using hit markers to record damage to the airfields. (b.) Added Fort Under Const. to the back side of the Fort marker for tracking construction. (c.) The Hit Marker now has 1-hit, 2-hit, and 3-hit levels that can also be used to record hits for harassment attacks. (d.) Have added Attack Supply and Out of General Supply markers to make it easier to track this as units are moved and supply is expended. (e.) Reversed the supply markers on the Unit Identification Chart so the side with 2 open half-circles represents 2 steps of supply and the side with 1 open half-circle and 1 filled half-circle represents 1 step of supply, since this makes more sense. (f.) Added non-stacking map markers for all of the ports in the game that can be placed next to the applicable ports that can be used to track hits and repairs with the corresponding RE capacities. This eliminates the need for hit markers to record damage to the ports. Added special versions for Benghazi, Tobruk, and Ismailia.

5. Added an Inventory button to make it easier to track pieces.

6. Added a Turn Sequence of Play button to make it easier for players to track the phases especially when you might have to save the game in the middle of a turn.

7. Added unit commands to allow the display of the Bombing/Escort/Transport ranges and the Interception/Patrol ranges of air units on the map.

8. Under the help menu, I added an Important Game Dates document to make it easier for the players to keep track of special dates listed in the rules (includes the applicable rule section in the list).

10. Added Send to Greece commands to all applicable Allied units. These commands only display during the turn they apply to that unit. For example, a Glad air unit should be sent to Greece only during the Jan I 1941 turn, so on the Jan I 1941 turn the Send to Greece command is avaiable to be selected. On any other turns, the command will not be available. This way you do not have to drag unit to holding box.

12. Added a custom Errata and Clarifications document to the help menu.

13. Added a Repair Air Unit command to all inoperative air units. By clicking this command, a d6 value will be generated and, taking into account the unit's nationality, the game turn and the d6 value, the corresponding result will be implemented and reported.

14. Added an Allied Garrisons Holding Box to the map to be used to hold the applicable units if Optional Rule 33.C, hidden forces in the Delta, Palestine, the Levant and Cyprus, is used.

15. Added the LeO.451 air unit to the available Vichy units per optional errata.

17. Added Show General Supply Range command to all ground units so players can quickly see which transportation line hexes are within the 7 hex limit for general supply.

18. Added a Perform Patrol Attack command to all fighter units. By clicking this command, a d6 value will be generated and the die roll result and the effect will be reported.

20. Added a Resolve Unit Campaign in Greece command to all Allied units and supply counters sent to Greece. This command is only visible on the Jun I 1941 turn, for units and supply counters in the Allied Units in Greece holding box. Clicking this command will automatically send a unit with heavy equipment to the replacement pool, automatically delete a supply counter, or for an Infantry, Light AA, or Air unit, a d6 value will be generated and depending on the unit type and die roll the appropriate result will be implemented and the result will be reported.

21. If you do not want to individually click each unit in the Allied Units in Greece holding box, on the Jun I 1941 turn, you can click the Resolve Campaign in Greece command for the Allied Forces in Greece mapboard button and all effects for all units and supply counters will be resolved, implemented, and reported.

22. Added German and Italian Armor and Non-Armor RP markers to each respective available pieces pool. When these RPs are received per the order of battle, then add them to the Europe Holding Box. Only if they make it across after the Malta checks do you add to the Axis Available Replacements Points track.

There is logging on almost every action to make it easier to see if you forgot something or to understand what is happening during replays.

This module contains a highly customized version of the original Western Desert Map. Many of the off-board tracking and holding boxes have been moved onto the main map and specific counters have been created to minimize switching from the main map to off-board charts. Information regarding key regions, ports, and shipping restrictions has been added directly to the map for easy reference. Two rollers added for 1d6 and 2d6 results.

In addition, several customized counters have been added to assist in game play:

New tracking counters are included for

New setup counters are used to help locate and position unit counters and remind players of the state of the road and railroad west of Matruh. These can be deleted when no longer needed. We have also thrown in some counters representing various commanders of the time period to use as suits your fancy!

Counters have new functionality according to type. Right-clicking on a counter will access the menu of options, the most useful of which are the ability to send dead units directly to their respective Replacement Pool or Eliminated/Scrapped box.

The new turn track in the lower right corner contains important footnotes regarding key events as the game progresses.

Finally, we have created a new mechanism to randomly draw units of the Italian Fifth Army (per Rule 28.A.1). In the lower left corner near Tripoli, there is a box containing a stack of counters representing the Fifth Army. This stack is actually a random counter deck. Simply draw a counter off the deck and flip it over! They will always come out randomly.

The initial game setup has also been corrected per the December 1983 errata and additions.

We will soon be adding a second Deluxe Version that incorporates the Desert Tracks terrain feature as first described in The Europa Magazine #15. This new module will include at least one shorter scenario (Enter Rommel).

You can also get the 0.4 version of the module here.

Retrieved from "https://vassalengine.org/w/index.php?title=Module:Western_Desert&oldid=61920"
Categories:
This page was last edited on 25 July 2020, at 23:48.
This page has been accessed 191 times.
Content is available under Creative Commons Attribution-ShareAlike unless otherwise noted.
Privacy policy
About Vassal
Disclaimers