This module is for the Wing Commander Customizable Card Game released by Mag Force 7 in 1995; this page has been named "Wing Commander" in accordance with VASSAL's guidelines regarding the naming of VASSAL modules.

Special thanks to the Staff of the Wing Commander Combat Information Center website for their kind assistance!

Regarding the Main Module

The following previously built play decks have been created by members of the community. To play with these decks, simply download the .vdck file and load it in to your play deck prior to the start of gameplay using the procedure outlined in the "Playing the Game" subsection above. Note that all decks are compatible with version 0.9.99 and later unless otherwise specified.

How to Use the Module

After starting the module through VASSAL, players will be given the standard set of options:

The first time a player plays the game, they should select "Start a Game Offline". They will then be prompted to select a Side. There are two Confederation player options and two Kilrathi player options. These four player options are there to support the four-player version of the game, though the module is setup so that Confederation-vs-Confederation games are possible (say, for a Gwynhevar or Olympus-type scenario) as are Kilrathi-vs-Kilrathi "internecine clan warfare" scenarios. For the Classic game, players should limit their selections to either Confederation1 or Kilrathi1, and select "Finish" at the bottom to begin using the mod. At that point the main controls will appear:

To draft a Deck, the player should begin by selecting "Draft Cards" from the Menu and select the tab in the Game Piece Palette that corresponds to the side they selected when they logged in. It is very important to select the correct tab - the cards are set up to be restricted for use only by the Side that is supposed to use them (with few exceptions), so selecting cards from the wrong tab will result in a deck full of unplayable cards (which is why folks submitting decks for distribution in the mod are required to indicate which player they had in use when they built the deck). Note that Luck cards have their own menu option; if a player wishes to include Luck Cards in their deck, they will need to select "Draft Luck Cards" from the Menu, which will open a topdown menu with all options locked except for the one corresponding to their Side. Selecting this option will bring up another window with single instances of each type of Luck card. In accordance with WCCCG's rules, a player may have only one instance of a particular Luck card in their deck, but they may have any number of any other type of card in their deck; this setup ensures adherence to that set of rules.

The next thing a player should do is select "Deck" from the menu and select the menu option corresponding to their Side; again, it will be the only option not greyed out. This will bring up an empty draw deck area with a black square in the center, the player's Deck. To begin adding cards to this deck, the player should make their initial selection from either the Draft Cards or Draft Luck Cards menu option by dragging the card to their Deck window, right-clicking on their selection and selecting "Add Card to Draw Deck" (or using the indicated CTRL-W hotkey). It's important to drag the card to the deck window first - some unusual behavior has been reported by those who just click on the option to add the card directly from the palette. Once the deck contains a single card, additional cards can be added to the deck simply by dragging and dropping the desired selection over to the draw deck. The "Card Counts" menu option displays the number of cards in all decks and in all player hands in the game. During drafting, it can be utilized by the player to help them keep track of how many cards there are in their Draw deck. Note, however, that this option only keeps track of the number of cards - it is up to the player to remember which specific cards they have added to their decks.

When the player is satisfied with their deck, or if they'd like to save the deck for the time being to pick up work on it later, the player simply needs to right-click on their draw deck and select Save. A dialogue box for saving the deck will pop up at that point. Players should note that if they want to share their decks with others on VASSAL, they will need to use the .vdck file extension with their file, in accordance with VASSAL's guidelines on acceptable File types. A deck of 60-cards typically only takes up about 20 kB of disk space.

For the sake of courtesy, it is strongly recommended that all players have built at least one play deck prior to their first game. Please refer to the Drafting section above for guidelines on how to build a play deck.

When you are ready to play a game, select the "Look for a Game Online" menu option. This will bring up the controls for the standard VASSAL interface for online play. Instructions on how to use the interface may be found here. Once connected to one another, players should decide via message chatting which scenario they'd like to play - either the Classic game, a special "Bottleneck" board for more difficult play, or the 4-player board - as well as which of the four available Sides they will play during the course of the game. At that point, the players will select "New Game" from the main VASSAL interface and select their Sides. 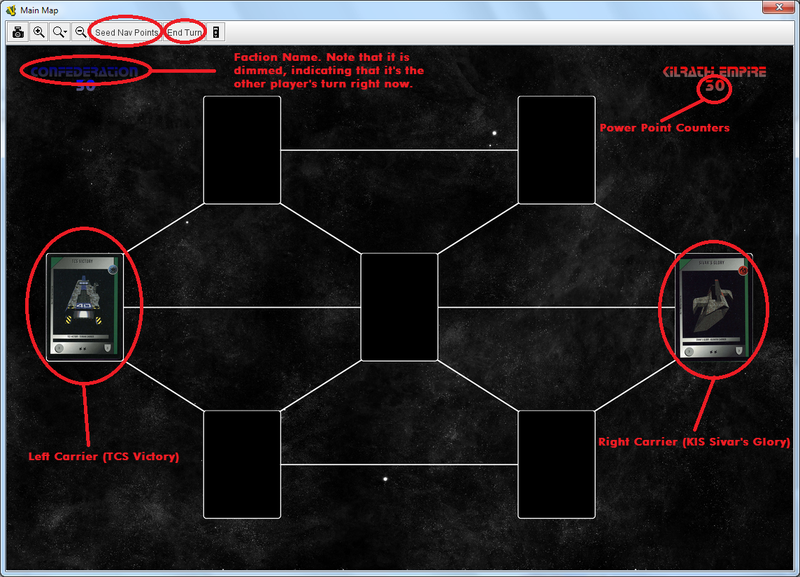 Each of the boards comes with the following set of features:

Boards will appear in their own window, and their options will as a result be separate from the main interface.

When play begins, players should open the deck corresponding to their player number, right-click on the blank square in the center, and select "Load" to bring up their previously built deck. Remember, only a deck built for the Side which the player has selected for the game will work. Once the deck is loaded, the players should bring up their hand under the "Hand" menu. They may then drag and drop seven cards from their Deck into their Hand. The deck does have the option to Draw Multiple Cards, so it is possible to draw all seven at once into a stack from the Deck into the player's Hand (though this has had mixed results in game play, so drawing cards individually is recommended.) Players may use the Card Counts menu option to check the size of their hands as well as that of their opponents; gameplay can commence once all players have seven cards in their hand. 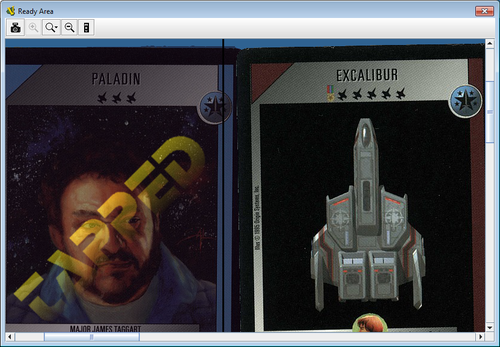 During the Muster Phase, players pay Power Points to Muster Cards out to their Ready Area. To do this, the player must open the Ready Areas by selecting "Ready Areas" from the main interface; this will open up another window with the Ready Area in it. Cards can be played to the ready area by dragging them from the Hand onto the Ready Area. Cards in the Ready Area are visible to all players at all times. To then pay for any card in the Ready Area, the player will select their Power Point counter by clicking on it and then adjusting the count as needed; use of the keyboard hotkeys (OPEN BRACKET and CLOSE BRACKET) are highly recommended in this case. Some cards also have additional Metals as part of their cost, requiring cards to be tapped (usually Pilot and Crew cards). Cards that may be tapped will have a Tapping overlay that may be toggled from their right-click menu or with the CTRL-T option.

Flights may be assembled during the Scramble phase. The mod supports stacking of cards; to do so, simply drag one card on top of another. The cards will be given adequate spacing in order to be able to read their effects, and they'll remain in the stack until the Flight is disassembled. It is recommended that Fighters go on top, of course, but players are free to assemble their stacks in any order that they wish. Once assembled, a stack is treated as a single piece by the mod as normal, and may be dragged and dropped onto the Board in use. During the Movement phase, a Flight may be moved in the same manner, by dragging and dropping it to another Nav Point on the same board. A Flight may be discarded from play as a whole unit or disassembled piece by piece (as what happens when it returns to the Ready Area). To disassemble the stack piece-by-piece, right click the top card of the stack, left click elsewhere to get rid of the right-click menu that appears, and then drag the top card. It'll be necessary to do this for all cards in the stack.

During Combat, players may play Maneuver and Battle Damage cards; these are played directly from the Hand onto the Board by dragging and dropping the cards. Maneuver cards will not stack with the other cards but Battle Damage cards will; it is recommended that any cards played in Combat be played off to the side of the flight they are being played on. At the conclusion of combat, any Battle Damage cards may be added to surviving Flight Stacks by the controlling player dragging and dropping their stack onto the Battle Damage cards. At the conclusion of combat, any card no longer in play may be discarded using the card's right-click menu. Remember, all cards in stack may be discarded all at once in this manner, so a player should be careful to check and make sure any medals in the cost of any of the cards are accounted for if they are forced to discard those cards.

Certain rules call for the use of markers - these markers include Medals, which are distributed if available to a Flight at the conclusion of combat, and "control markers", which may be applied when a player takes control of another player's card (as can happen when a pilot turns traitor, or a fighter/transport is captured by the enemy). Access to these markers is via the "Markers" menu option on the main interface; to use a marker, simply select the one needed from the menu and drag it into place. Medals do not stack, but control markers will.

When a player has completed their turn, they may choose to signal as such to their opponent by clicking the "End Turn" button. This signals the switch of the turn to their opponents. Play continues until one side runs out of Power Points or has their carrier destroyed.

Retrieved from "https://vassalengine.org/w/index.php?title=Module:Wing_Commander&oldid=61928"
Categories:
This page was last edited on 25 July 2020, at 23:49.
Content is available under Creative Commons Attribution-ShareAlike unless otherwise noted.
This page has been accessed 716 times.
Privacy policy
About Vassal
Disclaimers