In addition to many bug fixes, stability improvements, and performance enhancements, we've also added more new features to Vassal 3.4 than we have added in a while. This article will give you a quick tour of the new features, as well as listing some significant player-facing bug fixes. 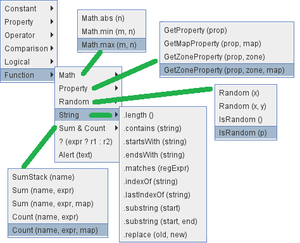 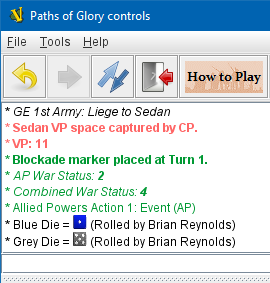 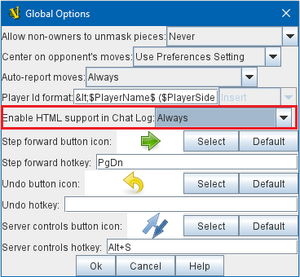 "Quick Colors" are also available by using a special character as the very first character in a line: ! for green, ? for pink, ~ for red, and ` (back apostrophe) for purple.

In order to take full advantage of this feature for your module, you will need to check the Enable HTML Support in Chat Log option in the Global Options of your module (in the Editor, scroll down to the [Global Options] component and open its Properties). This is to maintain compatibility with existing modules which may already have e.g. < symbols in text messages, that would otherwise be misinterpreted as HTML.

Searching in the Editor

Starting with VASSAL 3.4 the Editor has a Search function: Ctrl+F or select Search from the Edit menu. You can search for the names of individual components or optionally the names of classes (component types). Presently you cannot search for Traits within a piece or prototype, but this may be supported in a future version. 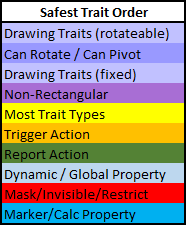 The online documentation has been substantially improved and updated. All of the screenshots and articles should now be "current to Version 3.4". Comprehensive documentation on the new Chat Log and other new features has been provided. There is also substantially more information on Trait ordering available in the Game Piece article. These documentation updates will eventually be rolled out to the Wiki and other locations as part of an ongoing effort.

Band Select controls in Does Not Stack 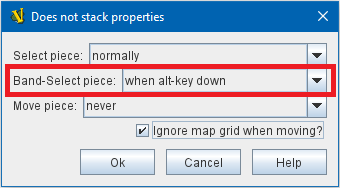 The Does Not Stack trait now contains an additional field which gives module designers separate control over whether a piece can be selected with a band-select (dragging a lasso or box around a group of pieces). This can be used, for example, to automatically filter out minor markers from band-selects (leaving only "real" units), or to filter out large stationary "pieces" that are used to denote the position of provinces on the map. A piece with band-select disabled can still be selected by clicking directly on it, meaning that such pieces can still have functional right-click context menus. 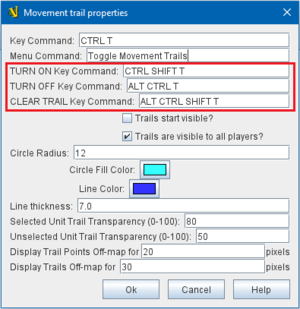 The Movement Trails trait now offers additional key commands, so that traits can be turned explicitly to the ON or OFF state, rather than merely toggled. Likewise the movement trail history of a piece can be cleared directly. These additional controls are intended to make it easier to implement Global trails on/off buttons e.g. on the Toolbar. 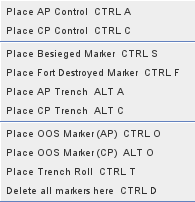 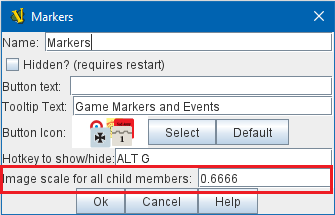 The Game Piece Palette, as well as its [Panel] and [List] sub-components, now accept a scale ("zoom") factor at which pieces within should be drawn. This can allow more usable, compact graphics in a piece palette, so that you can get more use out of valuable screen space (and won't be dependent solely on scrolling lists).

Beginning with VASSAL 3.4.0, two new properties are exposed on Basic Piece: ClickedX and ClickedY. These record the location, in map coordinates, of the exact location of the mouse the last time it was used to bring up the context menu (in other words, normally a Right Click, though on certain platforms other methods are possible). An example of use: imagine a large immovable piece that represented the area of a province or country. Right clicking on e.g. "Czechoslovakia" now leaves a record (in the Czechoslovakia piece) of precisely where the click occurred, so that if the menu item were to place a new piece it would be able to then move the piece to the exact click location.

The Undo button can now be assigned a hotkey (e.g. Ctrl+Z) by a module designer.

The Mouse-over Stack Viewer now offers an option to find all pieces overlapping the mouse location (rather than only pieces matching the precise location of the top piece found).

The Resign (aka Switch Sides) button now has a streamlined flow. It is in particular designed to make switching sides in "Hotseat" games faster, and will offer "successive defaults" for that purpose. In most cases during "Hotseat", pressing the shortcut key for the Resign button and then Enter will be all it takes to switch to the next player's point of view -- this removes three mouse clicks from the former flow.

We've pulled back, at least for now, the Mac Interface modifications that we trialed in 3.3.3-beta1.

In the past, the module designer controlled whether "Center on Opponent Moves" was a player preference or was "always on" or "always off" for a module. This led to lots of confusion, annoyed users, mystified module designers, etc. So we bid all that adieu! From Vassal 3.4.0, "Center on Opponent Moves" is strictly a player preference -- it will appear in the main preferences tab for every module.

Ctrl+Mousewheel Zooms In & Out on Maps

If a Map has a "Zoom Capability" component, then Ctrl+Mousewheel will now zoom in/out in addition to the other normal ways of zooming in and out.

Previously VASSAL only supported SVG files if their dimensions were given in "px" (pixels). As of 3.4.0, SVG files with any of the standard "fixed" dimensions are supported. (e.g. "pt", "cm", etc).

Although there are many many bug fixes and performance improvements in VASSAL 3.4.0, the following is a list of some of the more important ones for module designers and players:

Retrieved from "https://vassalengine.org/w/index.php?title=VASSAL_3.4_Release_Notes&oldid=64976"
This page was last edited on 22 January 2021, at 21:46.
Content is available under Creative Commons Attribution-ShareAlike unless otherwise noted.
This page has been accessed 1,857 times.
Privacy policy
About Vassal
Disclaimers