This article will give you a quick tour of the new features in VASSAL 3.5, as well as listing some significant player-facing bug fixes. 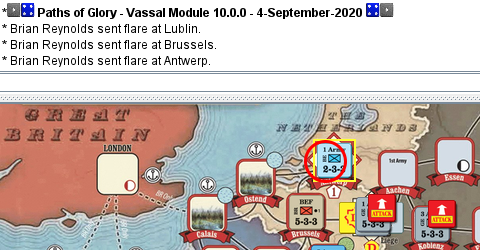 Flare - Will Be A Pulsing Circle

A "Flare" command has been added, allowing you to draw an opponent's attention to a particular location on the map. By default this is by Alt + Left Click but it can be reconfigured by the module designer. A pulsing circle will appear at the target location on the maps of all other players.

This feature works both in online play and PBEM games being replayed from the log. 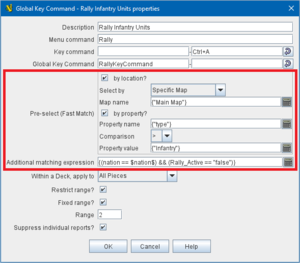 There is some necessary complexity involved with Fast Match, in order to achieve performance optimization. Any expressions supplied in Fast Match fields are immediately evaluated against the source (issuing) piece, but the results of those expressions are then matched to the target piece. For example if a Fast Match "by Property" is selected with the property name field filled with {"Status"} and the property value field is filled with {Rank + 1}, then the Rank property of the source piece will be read immediately, and a number one higher than it will be the value which is then compared to the value of the "Status" property in all potential target pieces. If instead of {"Status"} the property name field were filled with {"Status" + Type}, then the value of Type from the source piece would be used, and if it contained for example "Infantry" then the value of the property StatusInfantry would be checked on the target piece. 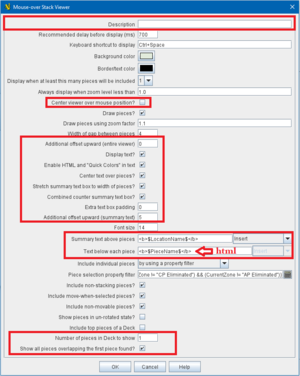 Many new features have been added to the configuration for Mouseover Stack Viewers: 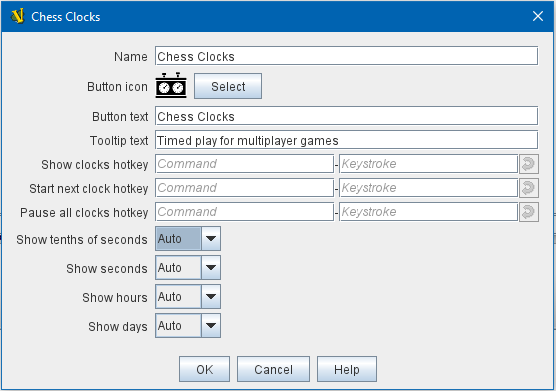 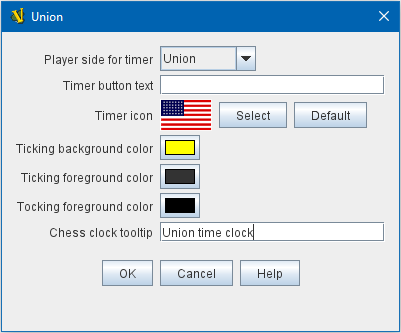 VASSAL now includes "Chess Clocks" which can be added to a module and used to facilitate timed online play. To add chess clocks to a module, right click on the main (top) module component in the editor and select "Add Chess Clock Control". Depending on the type of game, different modes of clock display can be selected.

Chess Clocks are not designed to facilitate timed PBEM games, as time usage in these situations cannot be verified in-game.

Editor can Search in Traits and Components 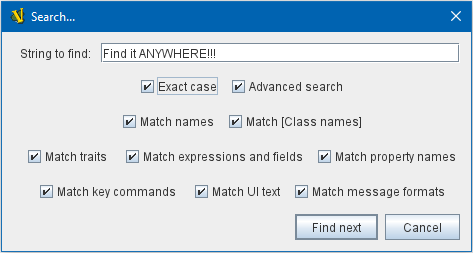 The Editor's "Search" function can now search into Traits and Components. Results from traits and components will appear in the chat log.

Ability to Deselect a Piece with a Key Command

Pieces can now be given a "Deselect" Trait. Activating the key command for this trait will cause the piece to be removed from the current selection (if it was present). Optionally the piece can also be removed from its current stack if desired. This can be useful in games where stacks frequently "drop pieces off".

Although it was possible to add a PDF file to earlier versions of VASSAL, it involved a considerable number of steps and "hoops to jump through". The process has now been vastly simplified. 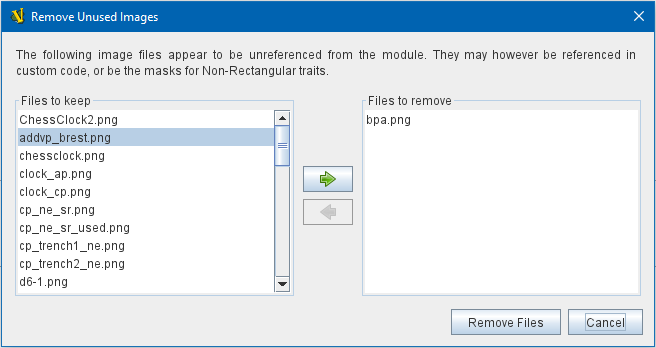 The Editor's Tools menu now has a "Remove Unused Images" feature, which will search for image files that are not referenced anywhere in the module and give you an option to remove them. Note that it is safe to launch this feature to take a look for unused files, because no images will actually be removed from the module file unless you then explicitly move them to the "Files to remove" column and then click the "Remove Files" button.

Note: The remove images tool will not be able to detect if an image is used by a "Custom Class" that does not register its image names with VASSAL. Custom classes can register their images by calling this method (available from either AbstractBuildable or Decorator): 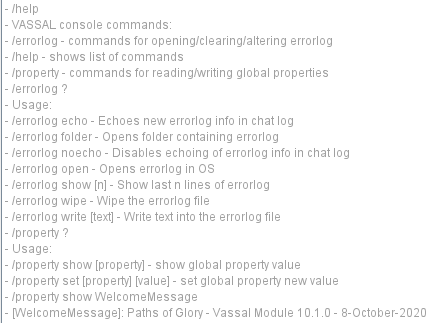 Vassal 3.5 includes a new console command feature for the chat log, upon which we may expand in the future. Presently it includes commands related to the errorlog and for examining and setting the values of global properties. Console commands do not function in multiplayer games.

Customized images and help files based on VASSAL language

Starting in Vassal 3.5.4, you can select different images and help files based on the locale (language) selected in VASSAL. By default, all images are taken from the "images" folder, and the help files, by the filename indicated when building the module, but you can add "images_es", "images_fr", "images_de", etc. folders, and if VASSAL is set to Spanish, French, German, etc. alternative images will be looked for there. The images should have the same name and format that the ones in the "images" folder. You can overwrite only a few images - if the image is found in the alternative, language-specific folder, it will be loaded from image, as usual.

Key Command configurers have been split into two fields. The "Command" field is now where you place Named Key Commands; the "Keystroke" field is for real keystrokes. In addition to improving clarity, this eliminates certain quirky behaviors of keystroke fields when typing in new values, and allows cut/pasting into the named command fields.

The VASSAL 3.5 window title bar now includes information on the most recent save, load, or logfile accessed. For those who keep multiple VASSAL sessions open at once, this should make it far easier to tell the windows apart.

A longtime complaint has been "forgetting to start a log file" when beginning a new session. A preference "sort of" existed for this, but it wasn't working very well. VASSAL 3.5 now includes improved functionality to begin any new session (e.g. after starting a game, loading a save file, etc) by starting a logfile. There is a "Don't Prompt Again" button for those who do not care about logfiles (and this function can be toggled on the preferences screen).

A chat log message will confirm when logging has begun.

Players previously mystified by the "enter logfile comments" prompt may want to give them another try -- logfile comments are now displayed prominently in the chat log when the file is loaded. The entry dialog has also been improved.

Previously there was no report given at the moment a player "switched sides". It is now reported in the chat log, in bold red text.

Choosing files on Linux will now use the native file chooser instead of the Java Swing file chooser. This should provide a smoother, more attractive experience.

VASSAL will now attempt to complete filenames with default filename extensions (e.g. ".vmod") based on the context.

Retrieved from "https://vassalengine.org/w/index.php?title=VASSAL_3.5_Release_Notes&oldid=67817"
This page was last edited on 29 June 2021, at 00:34.
Content is available under Creative Commons Attribution-ShareAlike unless otherwise noted.
This page has been accessed 2,838 times.
Privacy policy
About Vassal
Disclaimers