This article will give you a quick tour of the new features in VASSAL 3.6, as well as listing some significant player-facing bug fixes. 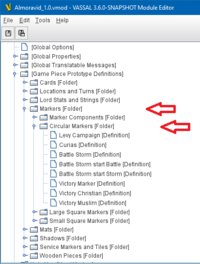 The Editor now supports folders inside of most components that accept "children". When adding new subcomponents you can also choose to "Add Folder" which will make a folder into which any valid subcomponents of the parent can be placed. In the example shown, folders are used inside of the [Game Prototype Definitions] segment to organize the prototypes.

Components in the Editor window can now be "dragged and dropped" from one valid location to another.

You can now duplicate a component in the Editor, which will make a second identical copy of it at the same location in the tree. If you duplicate a folder or a component that has children (subcomponents), then all of the child items will be duplicated as well.

The Editor now allows you to Insert an item at the currently selected location (as opposed to the traditional Add which adds an item at the bottom of the current list of subcomponents). This can be useful for adding to the middle of a long list of pieces, prototypes, or other components. 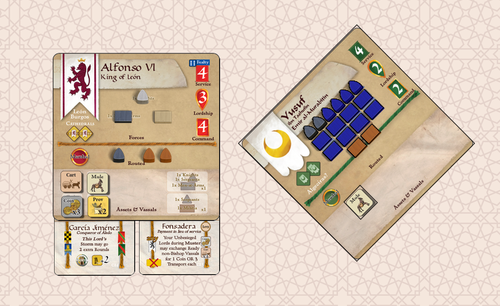 You can now add a "Mat" trait to a game piece to mark it as a piece that other pieces are placed upon. If those other pieces are marked with a "Mat Cargo" trait, then when you select the Mat the Mat Cargo pieces on it will also become selected--this means e.g. that if you drag the Mat around, then by default all the Mat Cargo pieces will come with it in the appropriate relative positions. Mats & Cargo can also be set to maintain relative facing (i.e. if you rotate the mat the cargo will be rotated as well).

You can now define the $BasicName$ property for a piece defined in a prototype by adding the new Basic Name trait -- this allows you to safely leave the Basic Piece member completely blank in an individual piece definition (e.g. in a Game Piece Palette, an At Start Stack, or a Place Marker trait or Replace With Other trait). The $BasicName$ property will be filled with the value from the Basic Name trait, ignoring any name (blank or otherwise) in Basic Piece. 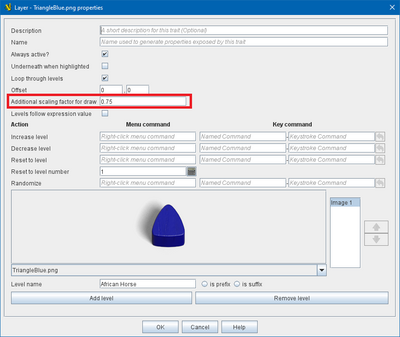 Both Layer traits (i.e. images) and Non-Rectangular traits now come with a built-in Scaling Factor field. This allows you to more easily adjust the relative sizes with which your various pieces are drawn, which can be particularly useful when boardgame companies supply source art that is not "in scale" with other parts of the game.

Does Not Stack improvements (DOES stack!)

The "Does Not Stack" trait just got interesting... it can now be told that in fact it DOES stack! This allows the creation of pieces that take advantage of some of Does Not Stack's other features that have accumulated over the years (such as the ability to ignore the map grid) while retaining the standard VASSAL stacking behavior.

A description field is also provided, and you'll notice in the editor that the key features of an individual Does Not Stack trait are better summarized in the traits list for a piece. 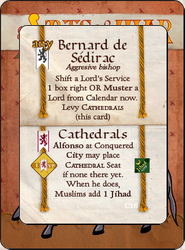 The Mask trait has a new centered Image Inset option that makes the full face of the card or piece visible to the owning player, while insetting it slightly into the "masked" card back as a reminder that the card or piece is currently hidden from the other players.

Simply choose Image Inset in the Display Style combo box at the bottom of the Mask trait's definition.

The Can Rotate trait now includes a key command to rotate the piece directly to a specific facing OR angle. Since the facing-or-angle is chosen via an expression, you can use a property in your expression to facilitate rotating however you like.

The Mask trait includes an Autopeek on Rollover checkbox, which allows masked pieces to continue to show their full rollover information to players who are entitled to see the piece (e.g. the current owner(s) of the piece). 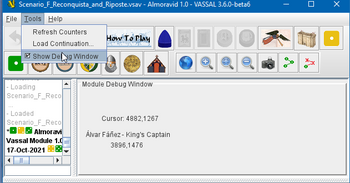 A module debug window can now be opened, either from the Tools menu or you can edit the [Global Options] of your module to add a hotkey and/or toolbar button for it. It will show the current mouse cursor position on the map, as well as the name and position of the currently-selected piece, and is designed to make it easier to find and adjust map locations during module development.

A related improvement is that when adjusting the location of a Deck or Setup Stack, the current coordinates are shown during the adjustment process, and there is a checkbox to allow showing the "ghosted" start position of other Decks and Stacks. Likewise when placing points to define the shape of a new Zone the coordinates are shown. 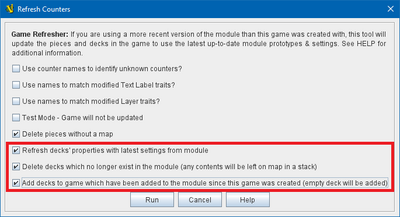 The Refresh Counters (and corresponding Refresh Predefined Setups tool in the Editor) can now refresh Decks: existing decks will be updated to use the latest settings from the module, which includes the ability to adjust the deck's location. If a deck has been deleted from the module it will be deleted from the current game (leaving any cards in a stack). Decks newly added to the module will be added to the game (though any new cards must be added separately, e.g. from palettes, and then dragged to the deck.).

Deck Restriction By Side

Decks in publicly accessible places (e.g. on the Main Map) can now have their access restricted to particular players. This means you can put player-specific draw piles or even hands on the main map (avoiding e.g. a whole extra deck window) while still allowing only the correct players to access them. 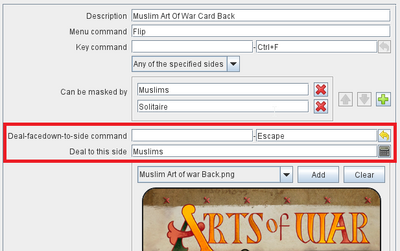 The Mask trait now includes a key command to "deal the card face down" to a side specified by an expression, meaning that as long as the card isn't currently "owned" by another player it will become owned by the specified side, and thus face down. This can be used to allow players to deal cards from a community deck while making sure they can't see the cards that other players received. 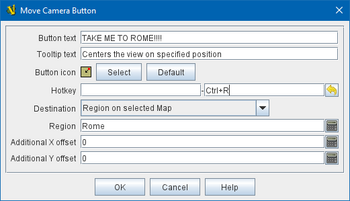 You can now add toolbar buttons to a map window which, when clicked, will cause the map view to recenter on a specific location (determined by expression).

When a Global Key Command interacts with a deck, the "fixed number of cards" it selects can now be determined by an expression. 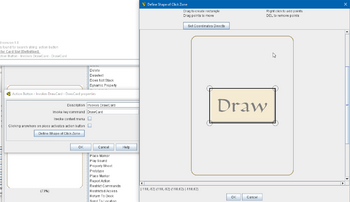 Action buttons now have a fancy visual configurer, and can be set to any polygon shape rather than only a rectangle. Also, the default for an action button is simply to turn the whole piece into a button (rather than always having to explicitly define boundaries)

Beanshell now supports the GetString() function -- which works like GetProperty() except it always returns the result as a string (even if the property was a number or a boolean). Likewise the .toString() suffix, which works similarly e.g. LocationName.toString() has been included in the expression builder.

All Message Format and Report Format fields in VASSAL now include the Expression Builder button. Beanshell was previously supported here, but was more on the "undocumented tips and tricks" side. Now it has been embraced as a documented feature. 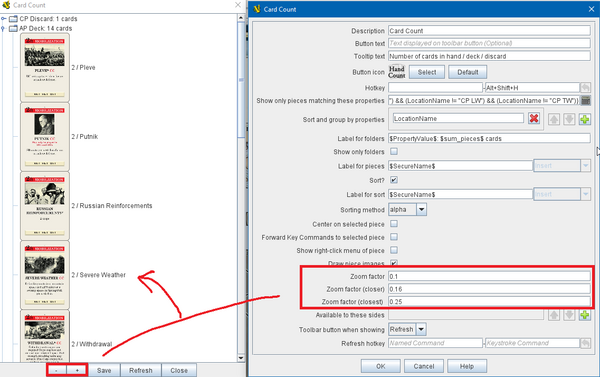 Inventory windows now support 3 levels of zoom, so you can include both a "tiny icons list" and a "large icons gallery".

Toolbar Buttons can be Disabled (Greyed Out)

LOS Threads can be configured to be multiple pixels wide.

Log files can be loaded in "fast forward" mode, which skips them to the end without the need to press the step-forward button multiple times.

They can also be loaded for "fast forward and append" which will go straight to the end AND commence appending further commands -- this is an easier/safer way to create complete logs of an entire game, while preserving the ability to stop from time to time to back up your progress so far.

These new options are both to be found on the Tools menu.

There are now native builds for 64-bit ARM Windows and 64-bit ARM MacOS. For best performance, we recommend using a native build for your system and architecture if one is available.

Some code which has been deprecated for more than a year has been removed. On loading a module containing custom code which uses removed or deprecated code, a warning dialog is now displayed immediately (instead of at the point when the deprecated code is used, as in 3.5).

Retrieved from "https://vassalengine.org/w/index.php?title=VASSAL_3.6_Release_Notes&oldid=73109"
This page was last edited on 11 January 2023, at 20:32.
Content is available under Creative Commons Attribution-ShareAlike unless otherwise noted.
This page has been accessed 7,789 times.
Privacy policy
About Vassal
Disclaimers