The extended inventory allows players to view the counters on a map. The output can be sent as formatted text to the chat window or a dialog window or as tree structure to a window. Counters can be shown individually or as totals. Additionally a markers value of a counter can be used. 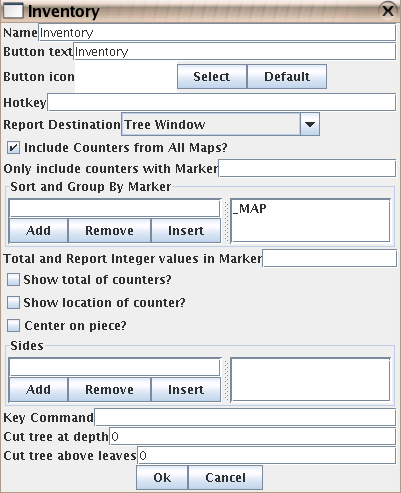 With Report Destination the output can be specified.

Only include Counters with Marker will restrict the inventory to those counters with the given marker.

Sort and Group By Marker defines a hierarchy of markers. The marker _MAP and _ZONE have a special meaning and are substitute for the map and/or zone a counter resides.

Total and Report Integer values in Marker defines a marker whos value is used for calculating totals instead of the number of counters.

If Show total of counters? is checked either the number of counters or if Total and Report Integer values in Marker is also checked the total of the markers value in the inventorized counters is shown.

Show location of counters? appends the location as defined by the map the counter resides on to the counters name.

Center on piece? is only meaningful with output to the Tree Window. It will center the map on the counter selected in the tree window.

Sides restricts the access to the inventory to certain sides.

Key Command is only meaningful with Tree Window and defines the hotkey sent to selected counters when the Apply button is used.

Cut tree at depth allows to restrict the output if only summaries and not individual counters are of interest. Depth is counted from the trees root. A value of 0 means show the complete tree.

Cut tree above leaves restricts the output in removing leaves from the tree. A value of 0 means show the complete tree.

This images shows an inventory used for displaying Victory Points of units in a dead pile. The Evil side can use this button to check the total of victory points gained by destroyed units on the map DeadPile. Instead of the number of counters found the markers VP value is used. As only the grand total is of interest to the evil side the output is cut at depth 1. 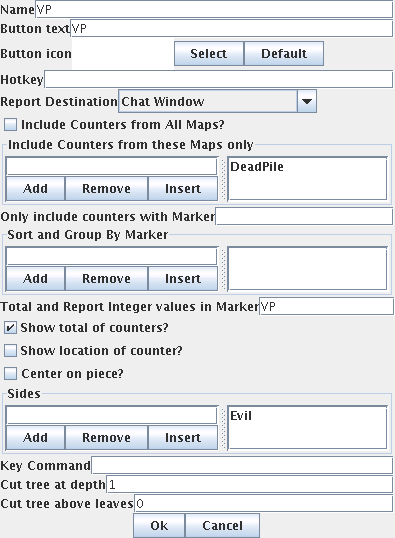 Here the output is sent into an own tree window that shows all counters with the marker DRV Flight that are located on Map. The tree is grouped by the contents of the marker Type. The output includes the location of the counters and when selected the map will center on the selected counter. When the apply button is used the hotkey ctrl-w is sent to all selected counters. 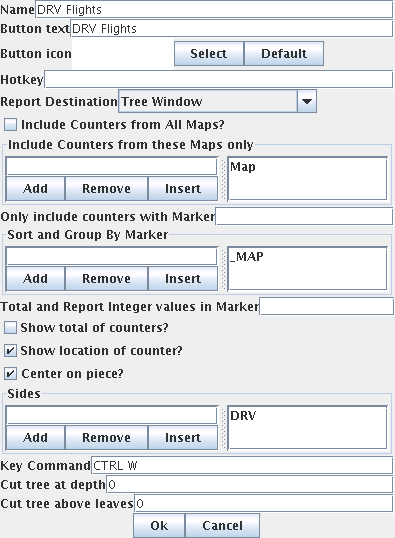 Retrieved from "https://vassalengine.org/w/index.php?title=Extended_Inventory&oldid=15297"
This page was last edited on 31 July 2010, at 20:37.
Content is available under Creative Commons Attribution-ShareAlike unless otherwise noted.
This page has been accessed 386 times.
Privacy policy
About Vassal
Disclaimers