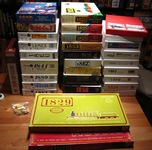 18xx is the collective term used to describe a set of railroad-themed stock market and tile laying games. The 18xx set has two main branches: the 1829 branch (1829, 1825, 1853, and 1829 Mainline) and the 1830 branch (1830, 1856, 1870, etc). There are also a number of crossover games which sit somewhere between the two branches (eg 1860). While general railroad operations such as track laying are critical to both branches, the two branches are fundamentally quite different in character and player focus. The 1829 branch games emphasize stock-picking and portfolio management while the 1830 branch concentrates more on financial prediction and stock market manipulation. So in 1829 et al players are rewarded for holding the right stocks at the right time and for running their companies well, while in 1830 et al they are are rewarded more for manipulating the stock market to their advantage and investing in the companies that thereby profit.

Retrieved from "https://vassalengine.org/w/index.php?title=Module:18xx&oldid=30981"
Categories:
This page was last edited on 17 January 2013, at 18:34.
This page has been accessed 645 times.
Content is available under Creative Commons Attribution-ShareAlike unless otherwise noted.
Privacy policy
About Vassal
Disclaimers