Module:A Time for Trumpets: The Battle of the Bulge, December 1944 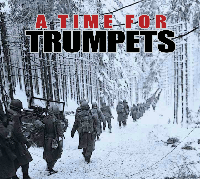 For secret allocation of aircrafts, passwords and aircraft reveal, the system remains unchanged.

Fix a bug with the two dice roller which systematically gave 1,1 for the first roll in previous versions.

In a general way it is recommended that players use a same version.

If you notice errors, omissions, misprintings, bugs, wrong setups or anything else please fell free to contact me by email and report it to me. I will make the corrections accordingly. Thank you.

A Time for Trumpets (ATFT) is a battalion level game of the Battle of the Bulge. The game system incorporates a number of concepts from two the highly playable games on the same subject: Bitter Woods by The Avalon Hill Game Company and the iconic battalion level Wacht am Rhein from SPI in 1977. In addition, the command and control concepts devised for the TAHGC version of The Siege of Jerusalem were utilized.

Retrieved from "https://vassalengine.org/w/index.php?title=Module:A_Time_for_Trumpets:_The_Battle_of_the_Bulge,_December_1944&oldid=70987"
Categories:
This page was last edited on 15 April 2022, at 00:55.
Content is available under Creative Commons Attribution-ShareAlike unless otherwise noted.
This page has been accessed 2,411 times.
Privacy policy
About Vassal
Disclaimers