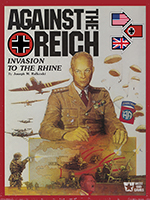 BoardGameGeek Link Against the Reich Invasion to the Reich is a WWII historical simulation, where you take the role of either the Germans or the Allies on the western front, designed by a veteran designer and historian, Joseph M. Balkoski. The novel 'initiative' system means that you never know who is going to move a piece next, based on a variable player impulse and individual unit activation. Divisions or Corps move 1 at a time. Headquarters and supplies are linked. The Allied Player has a choice of where to invade. The German Player has the choice to build up a reserve for a massive counter offensive.

With both historical, and free set ups the German and Allied players can either follow in Eisenhower and/or Hitler’s footsteps, or fight the battles using their own plans.

Retrieved from "https://vassalengine.org/w/index.php?title=Module:Against_the_Reich&oldid=67588"
Categories:
This page was last edited on 6 June 2021, at 18:29.
Content is available under Creative Commons Attribution-ShareAlike unless otherwise noted.
This page has been accessed 1,343 times.
Privacy policy
About Vassal
Disclaimers