Module:Age of Empires III: The Age of Discovery 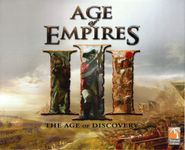 This Vassal module was designed to allow up to 6 players to play: Denmark, England, France, Holland (the “Dutch”), Portugal and Spain. It was tested to satisfaction with 5.

There is a board for each faction. Buttons at the top allow the owning player to add 1 unit or 1 coin of each type (when allowed). Units can also be sent back to the relevant faction board through a right-click menu command. The same can be done with Merchant Ships, Trade Goods, Buildings, (Americas) Discovery Counters and (Rest of the World) Discovery cards. Faction boards are visible by all players and accessible via the faction buttons in the module toolbar, but for convenience’s sake, each player will likely want to keep only their board open at all times and access the others when needed (unless they have a large screen… I use a 43” 4K TV). The windows are Vassal hand windows that have been divided into rows for each type of game piece. The built-in commands always send the pieces to the front (left) of the relevant row and the program then displays all the pieces in neat rows (though a click in the board window might be needed for it to refresh). Dragging and dropping pieces into these windows is not recommended (and not needed), but to do it properly, drop in the front of the relevant row.

The map is displayed small upon start and can be resized as needed. There are buttons in a variety of places:

Note that specific (point) “regions” (to use the Vassal term) are defined for the Turn Order, Initiative, Colonist Dock, Trade Goods, Capitol Buildings, Specialists, Warfare and Turn tracks. Dragging-and-dropping pieces on these tracks will automatically result in pieces locking to the nearest such regions. There are also specific (point) regions defined for the various buttons described above, and for where these buttons display pieces, as well as for the Trade Goods locations in the various regions. If a piece is dragged-and-dropped near one such region, it will likely snap to it. That’s particularly true in the Atlantic.

The game regions are all defined as “zones” (to use the Vassal term), meaning that pieces can be dragged-and-dropped in them freely and there will be no “snap to”. The Merchant Shipping and Discovery areas are also defined as zones since multiple pieces can be placed there by each player. Whenever placing pieces in a zone, it is recommended that each player stack their pieces in one spot in a region and use the stack viewer capability to see the contents of the stack.

In the event of simultaneous combat resolution, each unit can be shown as Killed (red cross-mark) via a right-click menu command. Once combat is over, those units that were killed must be returned to their decks (not their player’s board) via another right-click menu command (“Eliminate”). It is best, but not essential, to remove the Killed mark before Eliminating a unit (if you don’t the piece will display as Killed the next time it is bought, but then simply adjust its status at that time).

When the time comes to figure out trade combos and get money (coins), the players should use the right-click menu command available for the Merchant Ships and Trade Goods. It effectively allows a text entry (red text over black background displayed in the middle of the playing piece), so all pieces used in a trade combo can be designated A, B, C, etc.

A separate board, accessible via the module toolbar, is available to track VPs when instructed to do so. A VP marker for each faction is stacked at the start of the track; simply delete those that are not needed, and then move the VP markers as needed on the boards--no region or zone is defined on this board, so make sure you position the markers clearly as you would on a physical board.

Retrieved from "https://vassalengine.org/w/index.php?title=Module:Age_of_Empires_III:_The_Age_of_Discovery&oldid=67230"
Categories:
This page was last edited on 3 May 2021, at 00:23.
Content is available under Creative Commons Attribution-ShareAlike unless otherwise noted.
This page has been accessed 1,344 times.
Privacy policy
About Vassal
Disclaimers