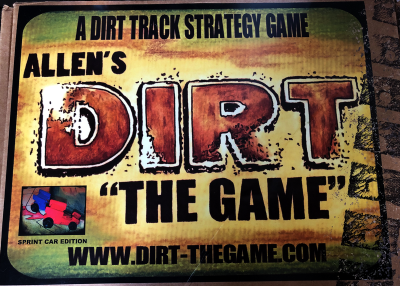 Allen's Dirt "The Game" was self-published by Eric Allen in 2013. It is a beer and pretzels game that had rules (as designed) that encouraged crashing and accidents and didn't represent actual dirt track racing. Ripwil and Thrippy modified the rules over several years to make the game more realistic and true to actual dirt track sprint car racing. However, it is still a roll and move racing game that is bound by the luck of the dice. We recommend using the modified rules included in the module. Additionally, running a 10-race season championship is the ideal way to bring the action to life and make each race and each top four finish important to the season championship.

Retrieved from "https://vassalengine.org/w/index.php?title=Module:Allen%27s_Dirt_The_Game&oldid=68967"
Categories:
This page was last edited on 26 October 2021, at 15:55.
Content is available under Creative Commons Attribution-ShareAlike unless otherwise noted.
This page has been accessed 650 times.
Privacy policy
About Vassal
Disclaimers