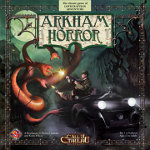 A cooperative adventure game themed around H.P Lovecraft's Cthulhu Mythos for one to eight players.

As per FFG policy, all common item card texts are blank to ensure players own a copy.

Curse Of the Dark Pharaoh:

Lurker At The Threshold:

Many improvements, like separate Game Boxes, a newer menu and the Kingsport Horror expansion.

About the turn counter:


b) Then when you hit the Mythos phase, configure the first player in the same menu to the next player. This way, when you hit next, it will go back to Turn +1, Upkeep, First Player...


c) Last, only the Location decks are set to Auto Shuffle, for the other one, just shuffle manually before starting a game ... and any time you would in a normal game.

Another version of an Arkham Horror module. I noticed that one had been posted recently, but I think this one works a lot better in some ways. As with the other module, the card text is blank for all items and spells, which will hopefully be acceptable.

Retrieved from "https://vassalengine.org/w/index.php?title=Module:Arkham_Horror&oldid=61010"
Categories:
This page was last edited on 24 July 2020, at 22:58.
Content is available under Creative Commons Attribution-ShareAlike unless otherwise noted.
This page has been accessed 4,758 times.
Privacy policy
About Vassal
Disclaimers