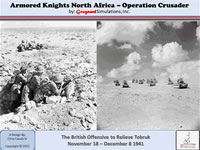 Operation Crusader builds on the award winning Armored Knights - Operation Gazelle game system. With variable strenghts and die roll modifiers the players never know exactly how well their troops will fight. This aspect of the game system makes for a really interesting battle.

You as the commander must try to put the best elements together and give your force the best chance for success. But the troops sometimes don't follow the plan or fight as well as you want. This variability in performance is what makes the game so intense. Infantry, Artillery, and Armor units are modeled at Battalion level and supporting arms are modeled at company level. The Commonwealth forces must releive Tobruk and the Axis must take Tobruk. These battles on the Egyptian frontier were fluid and chaotic, but also fierce and unrelenting. Air support plays a prominent role as does leadership.

The rules are structured along the 7 Battlefield Operating Systems, Command and Control, Maneuver, Fire Support, Air Defense, Intelligence, Combat Service Support, and Mobility and Survivability. This structure allows for simulating the effects of Military Intelligence (radio intercepts) on the battle, as well as obstacles and fortifications.

Included will be scenarios that cover the Battle for Sidi Rezegh and the Dash to the Wire. They will only require (1) 22x34 map equivalent and a smaller part of the counter order of battle.

Retrieved from "https://vassalengine.org/w/index.php?title=Module:Armored_Knights_North_Africa_-_Operation_Crusader&oldid=61014"
Categories:
This page was last edited on 24 July 2020, at 23:00.
Content is available under Creative Commons Attribution-ShareAlike unless otherwise noted.
This page has been accessed 691 times.
Privacy policy
About Vassal
Disclaimers