Module:Atlantic Wall: The Invasion of Europe 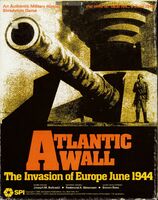 Versions 1.80 and 1.80A [NOTE: 1.80A replaces the standard SPI Map D with Wade Wilson’s alternate Map D, which eliminates much of the bocage behind the British/Canadian beaches.]

9. Added REPL steps to div HQ counters (right-hand side) to aid in record-keeping

11. Removed corps symbols from “Corps” prototypes (to avoid superimposing symbols on division symbols, and because it duplicates functionality with the colored corner triangles), but left in the functionality

12. Reoriented some information on maps to minimize upside-down text; modified map graphics to include map errata for hexes B5633 and C2619, and half-hex east of A2601.

15. Added prototypes for Artillery and SP Artillery, allowing notation on counters for Out of Battery (B1 for OOB-1 and B2 for OOB-2), and Out of Ammo (OA). These also include a reminder of the movement allowance for each type of artillery (MA6 or MA12) on the lower right of the counter.

16. Added DM prototype for dismounted mech infantry and assigned to prototype to appropriate counters. Also assigned to armored engineers and mech parachute to allow those types to dismount.

17. Added Beach counters for the Utah sub-beaches, to mark possible changed locations. These cannot be moved once placed, but can be deleted.

20. Added Polish DD Krakowiak, which is in initial setup for Map D but missing from counter mix

23. Removed 47DC/50xx from 50th Division, and moved counter to SSB with other commandos

25. Corrected prototype for US parachute companies from 1(2)6 to 2(1)6 (consistent with game counters)

28. Add Allied Ground Units Available box to map, for units available but not yet landed.

30. Some Canadian units flipped to reduced strength at start; changed to full strength

38. Changed setup for above

42. Some German companies were rotating by 120 degrees, due to inclusion of Counter prototype (including rotation) in both Ground-GE-ASS and Ground-GE prototypes, causing double rotation); corrected.

46. Changed TextLabel offset for Type property in Ground prototypes from -24 to -27, to give a little more room for long types.

58. Changed location of “moved” tag to lower right of counter

Additional Note: I have included the campaign setup in the module. In doing the setup, I noticed that two US Ranger battalions (2R/29xx and 5R/29xx) start broken down into companies on Omaha beach. This should mean 12 Ranger companies starting on the map. However, the setup only includes 9 such companies (6 scheduled to land at Charlie sub-beach, and 3 available to land anywhere on Omaha Beach in the first landing phase). To account for the remaining three companies, I have arbitrarily added them to the setup, to land in the second landing phase at Omaha. If anyone knows better where these three companies should be, please correct me!

Retrieved from "https://vassalengine.org/w/index.php?title=Module:Atlantic_Wall:_The_Invasion_of_Europe&oldid=72587"
Categories:
This page was last edited on 3 November 2022, at 03:43.
Content is available under Creative Commons Attribution-ShareAlike unless otherwise noted.
This page has been accessed 2,167 times.
Privacy policy
About Vassal
Disclaimers