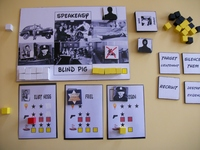 This is a solitaire game that was entered into the Solitaire Print and Play Contest on the BoardGameGeek contest last summer. Full rules are inside the module.

A challenging free Print and Play game for one player, aged 10 and up, lasting 10-20 minutes

Story: Year 1930. The Outfil leader, Al Capone, is running Chicago unchallenged. Until a bunch of federal agents, known as the Untouchables, tries to stop him. build up the case collecting pieces of evidence, patrol the streets, raid illegal bars, protect witnesses... Will you read Capone's intentions in time? Are you big enough a man to send him to prison?

The game is won if the player gets 10 pieces of evidence. The game is lost if the amount of evidence ever falls to zero, if Eliot Ness gets killed or if the court jury is utterly bribed.

Retrieved from "https://vassalengine.org/w/index.php?title=Module:Capone_Says&oldid=61178"
Categories:
This page was last edited on 24 July 2020, at 23:57.
Content is available under Creative Commons Attribution-ShareAlike unless otherwise noted.
This page has been accessed 426 times.
Privacy policy
About Vassal
Disclaimers