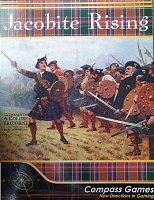 Jacobite Rising is based on the highly successful Commands & Colors Tricorne game system, where the Command cards drive movement while creating a “fog of war” and the battle dice resolve combat quickly and efficiently. In a Jacobite Rising Tricorne battle, unit morale is one of the main thematic concepts, as it was historically. There's the possibility that an entire unit that has only taken minimal losses, when forced to retreat, may actually break and rout from the battlefield. To further emphasize the differences in battlefield doctrine between the Highland Clans and Government forces, each army has its own unique deck of Combat cards. Game scale fluctuates, which allows players to effectively portray some of the larger historical Rising battles like Culloden and Falkirk, as well as smaller size skirmish actions. The 13 battles showcased in the scenario section of this booklet feature a stylized battlefield map that emphasize the important terrain features and highlight the historical deployment of forces in scale with the game system. (paraphrased from https://www.commandsandcolors.net/tricorne/the-game/jacobite-rising.html)

Retrieved from "https://vassalengine.org/w/index.php?title=Module:Commands_%26_Colors_Tricorne:_Jacobite_Rising&oldid=67865"
Categories:
This page was last edited on 3 July 2021, at 07:54.
This page has been accessed 268 times.
Content is available under Creative Commons Attribution-ShareAlike unless otherwise noted.
Privacy policy
About Vassal
Disclaimers