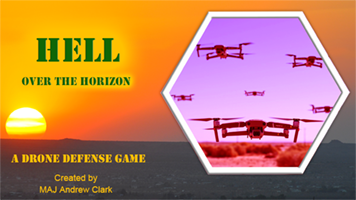 This game module is part of the MMAS series of games created by students of the Command & General Staff College (CGSC) MMAS in Wargaming program. Game created by MAJ Andrew Clark, US Army.

"Hell Over the Horizon is a game that models military installation defense against multiple, coordinated drone attacks. As technology and affordability of these systems increase, we can expect to see greater use of drones in future conflicts with our adversaries. As a result, this concern has prompted the Department of Defense to investigate several DOTMLPF-P approaches to solving this unique problem. This game aims to immerse players in a simulated environment that is both dynamic and competitive, forcing them to make decisions on how to use current technologies to counter drone threats most effectively. This game models technology development all the way through system fielding and usage. Players will also explore several different combinations of DOTMLPF-P approaches, active measures, passive measures, kinetic solutions, and non-kinetic solutions throughout the game. Players will find that in the counter-drone fight, there is no single silver-bullet solution; rather, the best method is a combination of multiple efforts."

This module was created by the Directorate of Simulation Education (DSE), Army University, US Department of Defense, and has been cleared for general release.

Retrieved from "https://vassalengine.org/w/index.php?title=Module:DSE-Hell_Over_the_Horizon&oldid=64248"
Categories:
This page was last edited on 18 December 2020, at 00:37.
Content is available under Creative Commons Attribution-ShareAlike unless otherwise noted.
This page has been accessed 250 times.
Privacy policy
About Vassal
Disclaimers