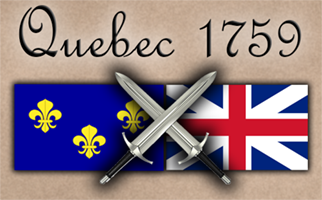 This game module is part of the MMAS series of games created by students of the Command & General Staff College (CGSC) MMAS in Wargaming program. Game created by MAJ Joseph A. Henderson, US Army.

"The British campaign to capture the French fortress city of Quebec in 1759 led to the decisive battle of the French and Indian War, and paved the way for British domination of North America for the next twenty years. While the ultimate battle on the Plains of Abraham is known to most scholars, the campaign along the St. Lawrence River that led up to the battle provides many lessons of operational level leadership that are still relevant today: maneuvering forces and securing lines of operation, integrating land and naval forces in joint operations, massing forces at the decisive point, simultaneity in operations, and the strategic use of key terrain. This paper provides the historical basis and rationale for the modeling decisions made by the researcher in the development of this wargame. Players will take on the roles of the Army Commanders, both learning the historical details of the campaign, and immersing players in the commanders’ decision making process. The wargame enables players to make decisions consistent with the information and capabilities available to the commanders during the campaign, and thereby allows them to gain an understanding as to why the campaign unfolded the way it did."

This module was created by Curt Pangracs, Directorate of Simulation Education (DSE), Army University, US Department of Defense, and has been cleared for general release.

Retrieved from "https://vassalengine.org/w/index.php?title=Module:DSE-Quebec_1759&oldid=64249"
Categories:
This page was last edited on 18 December 2020, at 00:37.
This page has been accessed 104 times.
Content is available under Creative Commons Attribution-ShareAlike unless otherwise noted.
Privacy policy
About Vassal
Disclaimers