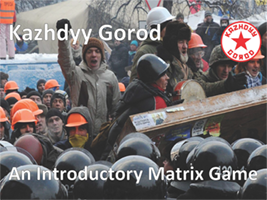 "Matrix games are different to normal Wargames. In most of those games you will probably compare lists of statistics and peer at complicated books of rules containing someone else's idea about what things are important, before making a decision, checking that it is covered by the rules and rolling dice to see if you succeed. It can take a long time, look really complicated and can be very difficult to explain to a newcomer. Instead, in a Matrix Game you simply use words to describe why something should happen, the Facilitator or the players (or both) decide how likely it is, and you might roll a dice to see if it happens (but equally, in the face of a compelling argument, you might not need to). If you can say "This happens, for the following reasons... " you can play a Matrix Game.

The games themselves are not intended to be fiercely competitive, with obvious winners and losers. Instead they operate with the players working to generate a credible narrative. It is from examination of this narrative after the game that the players gain insights into the situation be1ing portrayed. The player roles have objectives that will probably place them in conflict with other players, but it is perfectly possible for all of the players to achieve at least some of their objectives by the end of the game."

Original game published in 2015 by ----. This module was created by Curt Pangracs, Directorate of Simulation Education (DSE), Army University, US Department of Defense, and has been cleared for general release.

Retrieved from "https://vassalengine.org/w/index.php?title=Module:DSE:Kazhdyy_Gorod&oldid=64325"
Categories:
This page was last edited on 21 December 2020, at 22:50.
Content is available under Creative Commons Attribution-ShareAlike unless otherwise noted.
This page has been accessed 271 times.
Privacy policy
About Vassal
Disclaimers