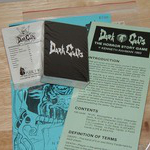 "What evil lurks around every corner? What blackness is harbored in the minds of mankind? What unspeakable terrors wait silent only until summoned? You will know once you have played the supernatural horror story game DARK CULTS."

In this horror story creating card game Life and Death play against each other to decide the fate of the protagonist Horace Phineas Lovejoy, who is out in the streets at night and experiences every event that is stated on the cards. While Death tries to subject him to unspeakable horror with his demise as ultimate goal, Life tries to save him from Death's malicious plans.

The objective is to gather points and, most importantly, to create and engage into a story.

The rules are contained in the module. You can find them after clicking the "Rules" button.

Additional rule: Object cards (O symbol on the top left) need to be placed after location cards and have a value of 2 points.

Below these cards is a big picture of a lonely, sinister night street. This is where the story cards are supposed to be put to form a storyline.

Designed by Kenneth Rahman, card art by Eymoth and published by Dark House.

The game is, unfortunately, out of print.

Retrieved from "https://vassalengine.org/w/index.php?title=Module:Dark_Cults&oldid=61263"
Categories:
This page was last edited on 25 July 2020, at 00:25.
Content is available under Creative Commons Attribution-ShareAlike unless otherwise noted.
This page has been accessed 465 times.
Privacy policy
About Vassal
Disclaimers