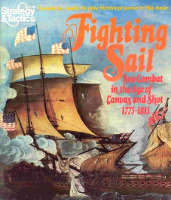 - This is not an earlier version of 1.11 (above). It is an entirely separate version originally based on a module by Nathan Mueller which has been graphically overhauled and functionally enhanced. See the module help file for details.

- Revisions have been made to several ship counters. Mainly, in the Lake Erie scenario, ships under 100 tons have been downgraded one rate. Details in ShipList.pdf (highlight indicates changed ships, new values in parentheses).

Retrieved from "https://vassalengine.org/w/index.php?title=Module:Fighting_Sail&oldid=66797"
Categories:
This page was last edited on 3 April 2021, at 22:59.
This page has been accessed 286 times.
Content is available under Creative Commons Attribution-ShareAlike unless otherwise noted.
Privacy policy
About Vassal
Disclaimers