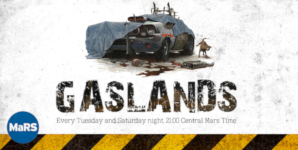 Gaslands is described by its creator as "...a tabletop game of post-apocalyptic vehicular mayhem. With fast and cinematic rules, it is designed to be played with toy cars, allowing players to ram, skid and race their way through the wreckage of a burnt-out Earth." The game has been described a "spiritual successor" to Steve Jackson Games' "Car Wars" by Car Combat Central, although the two games utilize significantly different mechanics.

Players first develop a roster of kit-bashed and distressed toy cars and then outfit them with various weapons, upgrades, and abilities using a fixed budget of "cans," a fictional currency. Players choose templates to guide the direction and distance that their car travels. Speed is controlled by rolling "skid dice" that also determine if a player's vehicle will spin, slide, or flip during/after a maneuver. Certain maneuvers may become hazardous at high speeds (or cannot be performed at all), so balancing acceleration and deceleration is critical to negotiate the optimal line of the course in the shortest number of turns.

Clean racing is not the only way to win at Gaslands. In fact, dirty driving is encouraged, especially in demolition-derby scenarios. Some vehicle types are better suited to survive repeated collisions,often at the expense of speed. In addition to close-quarters vehicular combat, players will utilize their car-mounted and crew-operated weaponry to either keep opponents at a safe distance or reduce them to flaming wreckage.

Version 1.3.1 introduces realistic vehicle counters for a majority of the vehicles present in the rule book. V1.4 includes significant improvement in obstacle and terrain graphics. The UI and game play remains unchanged from version 1.3.1, which introduced an enhanced interface with reduced menu ribbon clutter and simpler contextual menus.

Retrieved from "https://vassalengine.org/w/index.php?title=Module:Gaslands:_Post-Apocalyptic_Vehicular_Combat&oldid=61408"
Categories:
This page was last edited on 25 July 2020, at 02:30.
This page has been accessed 512 times.
Content is available under Creative Commons Attribution-ShareAlike unless otherwise noted.
Privacy policy
About Vassal
Disclaimers