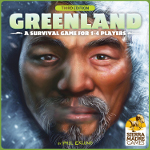 version 3.2 released on 3 April 2020, with a fix for the missing Valhalla tribesmen

Please check the HELP/READ ME window in the module for detailed instructions. Also look for the dedicated threads on the Greenland 3rd Edition forum on boardgamegeek.com

Retrieved from "https://vassalengine.org/w/index.php?title=Module:Greenland&oldid=61443"
Categories:
This page was last edited on 25 July 2020, at 02:39.
Content is available under Creative Commons Attribution-ShareAlike unless otherwise noted.
This page has been accessed 457 times.
Privacy policy
About Vassal
Disclaimers