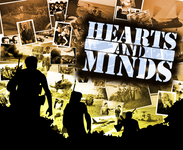 The latest version take this to the new 3rd edition from Compass Games.

In version 5, I added the Commander, a helper window that is most useful in pbem. It has a list of action buttons and a counter to track your spent RPs. You would press an action button just before you did that action. The button prints a message in the chat area and increments the RP counter if it knows how many RPs you spent. For example, suppose you are about to mobilize Pleiku to move your units there. You point the white arrow at Pleiku and press the "Mobilize" button. It prints "Mobilize" in the chat window and increments the RP counter by 1.

When you choose a scenario, make sure you read the setup in the playbook because sometimes you will need to make adjustments. The Red player should put VC units wherever he sees a "VC Unit" marker. He can delete them all when he finishes if he right-clicks on any one "VC unit" marker. Note that some scenarios tell you to remove 16 cards before you add the 1969 cards and to put the `6 cards at the bottom of the deck. You can't do that in Vassal, so you should discard the 16 cards instead.

The 1970 scenario in the playbook has a minor error in it. It says for Blue to set up 3 CA units. This is incorrect. It should be 2 vet CA only. The module has it right. It's not a big deal because the 3rd CA unit appears in 1971,

Hearts and Minds can have a lot of interruptions, which could be a headache in pbem. I suggest you play through the interruption points and allow your opponent to interrupt afterwards. For example, suppose you as Blue move a stack of units into Pleiku where you plan to attack the units there. I suggest you do not pause to allow an interruption. Instead keep on playing: Resolve the attack. Then attack and move as you wish. When Red plays back your turn, he pauses at the appropriate point and creates a log, for example, to resolve an ambush and/or evasion in Pleiku. Then when you get back his interruption turn, you take up where he interrupted. Ignore everything you did after the interruption.

I suggest you don't try to salvage anything (dice rolls, etc) which occurred in your original move after the interruption. Just ignore everything after the interruption and redo it fresh. Trying to salvage pieces from the original turn is a slippery slope where eventually you will need to make awkward decisions about what to keep and what to scrap.

Retrieved from "https://vassalengine.org/w/index.php?title=Module:Hearts_and_Minds:_Vietnam_1965-1975&oldid=67489"
Categories:
This page was last edited on 28 May 2021, at 05:37.
Content is available under Creative Commons Attribution-ShareAlike unless otherwise noted.
This page has been accessed 559 times.
Privacy policy
About Vassal
Disclaimers