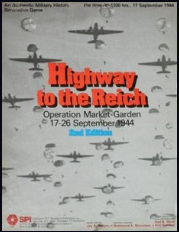 This is the ORIGINAL SPI Highway to the Reich monster game on Operation Market-Garden, reflecting that game's 2nd Edition. The 1.5 version of the module offers several improvements over the original version, including map errata incorporated on the map artwork, additional markers for air strikes, CAP, disruption, entrenchments, objective hexes and ammo depletion, and a Campaign Game set-up Preset. In the interface, the buttons were improved, a Dead Pool display has been added, plus a handy Flight Path Line of Sight button for Allied airdrop resolution and artillery spotting.

Additionally, the counter art was improved such that the unit morale triangles now reflect the original counter art. Pieces now rotate as well.

The original v1.1 module has also been included for "completeness".

Version 1.56
- Added a Bridge Intact layer to the Bridge marker. - Set unit rotations to 12 points instead of 6.

Version 1.54
- Moving the Turn markers on either side's Turn Track reports in the text buffer. - Corrected the German Formation display to add the specific "destination hex" of one group of SS units beginning near Arnhem.

Version 1.51
- Airborne Supply markers added - Initial setup file added as a preset: All German units are set up per the Organizational Display. XXX Corps set up is per Allied player discretion, so these are not placed on the map. - Four player positions per Side, in addition to "blanket" German and Allied sides, were added. This has not been playtested, but the hope is this will allow any combinations of up to 8 players to play a PBeM game without any issues arising where a player can be "locked out of his own side" if another player does not "Retire" before sending a .vlog file to another player. (If this does not work as planned, please DO contact the Maintainer with a "bug report")

Uploading v1.51, and changing the file notation of the "old" 1.51 to 1.50 (consistent with the name of the vmod file).
The changes from 1.5 to 1.51 are: adding the Airborne division supply head markers, adding additional zoom levels to the map and increasing the mouseover zoom (good for "old eyes"), and adding a Notes window.

Retrieved from "https://vassalengine.org/w/index.php?title=Module:Highway_to_the_Reich:_Operation_Market-Garden_17-26_September_1944_–_2nd_Edition&oldid=69307"
Categories:
This page was last edited on 29 November 2021, at 18:20.
Content is available under Creative Commons Attribution-ShareAlike unless otherwise noted.
This page has been accessed 1,150 times.
Privacy policy
About Vassal
Disclaimers