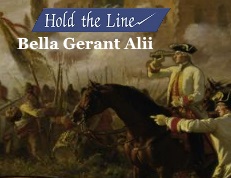 Unofficial Addon Based on Hold the Line: Frederick's War Module by Richard Canavan and Judd Vance.

-Some special rules are not included and can only be found in the scenario booklet.

-Some of the Scenarios are in Beta-phase.

-The Battles of the Austrian War of Succession are based on works by Sean Chick.

Retrieved from "https://vassalengine.org/w/index.php?title=Module:Hold_the_Line:_Bella_Gerant_Alii&oldid=61478"
Categories:
This page was last edited on 25 July 2020, at 17:22.
Content is available under Creative Commons Attribution-ShareAlike unless otherwise noted.
This page has been accessed 475 times.
Privacy policy
About Vassal
Disclaimers