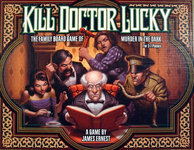 This module includes the base game as well as the S.S. Anfang components from the Doctor Lucky Ambivalence Pack expansion and Doctor Lucky's Dog from the variant of the same name.

Kill Doctor Lucky is a 'pre-mystery' game where the players are attempting to knock off Doctor Lucky (and prevent the other players from robbing you of the chance). The help file in the module contains only a very basic run down of the rules, but luckily the full rules for the base game can be found here and the expansion rules can be found here.

Kill Doctor Lucky was designed by James Ernest and published by Cheapass Games. This module was created with permission.

Retrieved from "https://vassalengine.org/w/index.php?title=Module:Kill_Doctor_Lucky&oldid=61550"
Categories:
This page was last edited on 25 July 2020, at 21:41.
This page has been accessed 290 times.
Content is available under Creative Commons Attribution-ShareAlike unless otherwise noted.
Privacy policy
About Vassal
Disclaimers