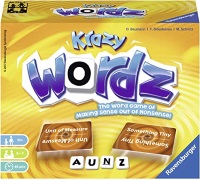 Files have been removed at request of module creator

Also a QuickStart is available how to play the game in Vassal. (Help -> QuickStart, when module is loaded)

Important: You need to load a card deck inside the game. The game itself has not cards by default. (see also Screenshots)

The following Powershell Script can be used to convert a text file with a line for each card content to a Vassal Card Deck.

Run the script in a folder with a file called "cards.txt" which will then converted in a "cards.vdck" file that can be loaded.

Retrieved from "https://vassalengine.org/w/index.php?title=Module:Krazy_Wordz&oldid=64500"
Categories:
This page was last edited on 1 January 2021, at 17:58.
Content is available under Creative Commons Attribution-ShareAlike unless otherwise noted.
This page has been accessed 213 times.
Privacy policy
About Vassal
Disclaimers