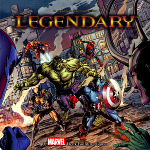 Fan 1.0 A Fan-made version of the Legendary Marvel Heroes deck building game. It changes the heroes for teams, a lot of new Bystanders and new Schemes, all based on the original game and expansions. It's not meant to get any reward, monetary or fame, for this work. It's just a free fan-version exclusive for Vassal. There is not any automation at all but extensively use of hotkeys and auto-shuffle. So you may play it as you play on a table. (Better read the game rules included in it).

Version 5.0 - with or without extensions - generates errors from missing files. The game can be set up and played by avoiding the related files, but this needs fixing. Until this is fixed, Version 3.0 is recommended.

Other comments on v5: !! TO PLAY WITH ALL EXTENSIONS YOU HAVE TO UP THE MODULE JVM INITIAL HEAP MEMORY TO 512Mb AND THE JVM MAXIMUM HEAP MEMORY TO 1024Mb !!

And it's still not working, even if increase more. And module not working without expansions - missing files. (Note: If the Villains expansion is deactivated, the module and other extensions work fine.)

Version 4.1 - Added "put under hero draw" function - correction of some bugs - Work with all 4.0.x Extensions

Version 4.0.4 - Expansion Villains for 4.x modules - it is not the stand alone module of Legendary: Marvel Vilains, it is an expansion to play on base marvel game with an cross-over of Villains cards - Added Missing Scheme Twist "Crown Thor King of Asgard" - Added Missing Hero "Sabretooth"

Version 2.71 - Added missing "Save Humanity" scheme along with all missing randomizer cards.

Version 2.6 - Added majority of expansion cards, implemented face down bystander deck w/ new bystanders, disabled auto-shuffle on Villain and Hero Decks to work with cards that affect the top cards of those decks. Hero and Villain decks must now be manually shuffled from the start.

Retrieved from "https://vassalengine.org/w/index.php?title=Module:Legendary:_A_Marvel_Deck_Building_Game&oldid=61604"
Categories:
This page was last edited on 25 July 2020, at 22:00.
This page has been accessed 1,013 times.
Content is available under Creative Commons Attribution-ShareAlike unless otherwise noted.
Privacy policy
About Vassal
Disclaimers