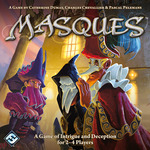 Winning game of the 2009 Concours de créateurs, previously known as "St Benoît". In the city of Doges, the players are vying for influence as a successor to the ruler needs to be found.

The succession arouses envy and the players will have to seek the protection of the Doges or the favours of influential characters in return for few crowns. After a first part of draft of cards, the players lay down their cards behind the columns of San Marco, in order to plot in favour of their order.

Each turn, they will puts card on a location of their choice or purchase an Influence card. The are six different characters that make up the influence cards, each with their own powers, e.g. the peddler, the assasin and the gondolier.

Module in EN by VassalForge. You can find the Module here

Retrieved from "https://vassalengine.org/w/index.php?title=Module:Masques&oldid=61675"
Categories:
This page was last edited on 25 July 2020, at 22:25.
This page has been accessed 104 times.
Content is available under Creative Commons Attribution-ShareAlike unless otherwise noted.
Privacy policy
About Vassal
Disclaimers