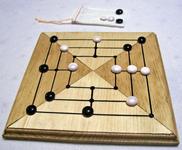 To move: The moves are split into three phases. When beginning the game, players alternate placing one of their pieces on any empty node on the board. Once all 18 pieces have been played, players alternate taking turns sliding a piece from its node to any other empty node connected to it by a line. If a player's move (during either phase) completes a "mill", which is a line of 3 of that player's piece, then that player gets to remove any opponent's piece from the board that is currently not in a mill. A mill may be broken and reformed several times and the player may remove a piece each time it is formed. "Fly" rule (third phase): When a player is down to 3 pieces, that player may move his or her piece to any empty node on the board.

To win: A player wins when he or she reduces the number of the opponent's pieces to 2 or puts the opponent into a position where he or she cannot make any legal moves.

The board starts out empty. Players alternate placing all 18 men on the board. The object of the game is to form a mill of three men along any of the 16 lines. If a player creates a mill, they remove one of their opponent's pieces from the board. The player may not take a man from an opponent's mill, unless there are no other options on the board. Once all pieces have been placed, players alternate sliding pieces to adjacent, empty nodes. Players may move their piece in any direction and are not allowed to leap over their opponent's pieces. During either of these phases, whenever they form mills, they remove one of their opponent's pieces. If the player is unable to move, their opponent continues until there is a move available. When a player only has 3 men left, he or she may fly. During this phase, the player may move to any position on the board. Capturing is still enforced in this phase. When a player reduces the opponent's men to 2 or the opponent cannot make a legal move on his or her turn, the player wins.

Retrieved from "https://vassalengine.org/w/index.php?title=Module:Nine_Men%27s_Morris&oldid=61757"
Categories:
This page was last edited on 25 July 2020, at 22:54.
Content is available under Creative Commons Attribution-ShareAlike unless otherwise noted.
This page has been accessed 318 times.
Privacy policy
About Vassal
Disclaimers