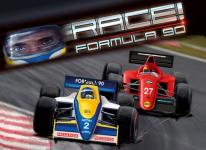 What's different in the Benetton version 1.0: These are all tracks posted by Hilinski on BoardGameGeek that are ready for use with his Benetton play system.

What's different in version 6.1 from v6: Changes were made with the graphics to reduce the file size.

What's different in version 5 from v4: Version 5 adds Barcelona and Silverstone plus enhancements.

What's different in version 4 from v3: Version includes the original circuits for Monza and Hungaroring and expansion 1 circuits for Spa Francorchamps and Monaco. In addition, I have completely overhauled the module. The v4 demo will give you a quick tour of how it all works! You can choose any side when you run the demo.

Retrieved from "https://vassalengine.org/w/index.php?title=Module:Race!_Formula_90&oldid=62957"
Categories:
This page was last edited on 9 September 2020, at 20:42.
Content is available under Creative Commons Attribution-ShareAlike unless otherwise noted.
This page has been accessed 604 times.
Privacy policy
About Vassal
Disclaimers