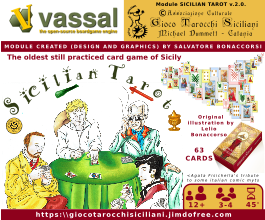 All other files (rules in english and italian, instruction, video, ecc..) are at link: https://giocotarocchisiciliani.jimdofree.com/giocare/software-free/

Link to a playlist of VIDEO-TUTORIALS on Module use (italian): https://www.youtube.com/playlist?list=PL6IUbfhgIyUINzf6yQD6t2ip86AB5qYcB

email for informations or support: giocotarocchisicilia@gmail.com

1) I correct a problematic bug for no restrict posibility in private hands to turn over the cards; 2) I add a new chart window (icon with warning sign '!' in Toolbar). It contains a double chart panel with an important 'Fair Play&Utility Tab' (in italian and english version) with rules of behavior and use of windows to have a correct flow of game without bugs; 3) I move near Help window icon '?', the Card-Points and Victory-points window help chart (icon is changed with coin and '?' in the centre); 4) In Help Window Chart I add scheme to explain the procedure for the acquisition of the three cards of the 'Monte' and for the realization of the Discard of three hidden cards between the owned tricks pile; 4) In Deck Window are now avilable in cards Menu save and load function, to allow sharing of the deck with identical distribution in other match; 5) I insert Zoom functions in Total cards Attack and Defence decks; 6) I add near Playin Area, up to Score-Notes Tile ('SEGNA') a text string to designate the Score Appointee, the only player delegated to use the functions of the windows and the markers for calculating, annotating and updating the scores; all other players should open those windows in view only, to avoid confusion or possible bugs; 7) I made some corrections on the English translation for the Module when Language in Preference is selected on 'English'; 8) I correct some visulization problems about texts positions in Attack and Defence Total-cards Windows.

The Sicilian Tarot is an early, intelligent point-trick game, heir to a tradition invented in 15th-century Italy at the Ferrara and Milan courts – nothing to do with the spurious esoteric meanings attributed to it in France at the end of the 18th century. Later developed in Bologna and Florence and spread elsewhere with a number of local variants, the Tarot seems to have arrived in Sicily between the 16th and the 17th century from Rome, in a 78-card version; or perhaps from Genoa, in a 98-card version called "Gallerini". A Sicilian deck was produced from as early as the 17th century and throughout the 19th century by the Palermo paper-making guild. The game was played within conversation or recreational circles in various areas of Sicily throughout the 19th century. From 1882 to the 1970s, the Sicilian Tarot deck was produced in Catania, by the Concetta Campione firm. Since 2014, it has been the only game registered in the list of the Intangible Cultural Heritage of Humanity in the Sicilian Region. Today the game is still played in four Sicilian towns (Mineo, Tortorici, Barcellona Pozzo di Gotto, Calatafimi) in different variants, as well as in Catania, where a growing number of enthusiasts follow the inspiration of the Sicilian Tarot Game Cultural Association - Michael Dummett.

Its unique features set it apart from the sophisticated games played elsewhere in Italy (e.g. Piedmont or Bologna) and Europe. Starting perhaps as early as the 19th century, the number of its cards was cut down to 63 by eliminating the lower pips: 1 to 4 of Swords, Clubs and Cups and 1 to 3 of Coins. All suits have 4 court cards: Lady, Knight, Queen and King. The curtailing was probably motivated by a need to adapt the game to three players and, perhaps, speed up production and reduce costs. The pip cards are the last in Europe to show a variant of the Latin model known as "Portuguese", with, in the ancient and MODIANO version, alphanumeric indices identifying each card on its upper and lower margins (e.g. 9C = Nine of Cups). The Kings and Queens are enthroned, not standing. The Jacks actually look female, and are therefore called "Donne" (namely, "Ladies"). In the numeral cards, the Swords and the Clubs are interwoven and overlapping, rather than separated as in the Sicilian deck; in the latter, besides, the Cups have different shapes. The 21 cards called "Trionfi" or "Tarocchi" have the role of trumps, while "U Fujutu" (i.e., The Runaway), not numbered, represents a jester – or The Fool in the other Tarot decks. The module version of the deck is an original re-interpretation specially designed for the module and digital use, starting from the version printed with the new original extraordinaryies drawings by the Sicilian artist Lelio Bonaccorsi, with, for the first time, Anglo-French symbolic and numerical indexes, great and clear, in the corners of the card.

With the Sicilian Tarot deck many different games are played today that share the basic rules of the game and the value of the cards. The general structure of these rules is similar to that of the Piedmontese Tarot. The basic rules, common to all Sicilian games, are listed below:

The various games that in some cases are still played today are distinguished by number of players and partnerships between them, the way of dealing the cards, the preliminary phases of setting temporary partnerships, the presence or absence of bidding for additional objectives, the scoring methods, and the aim of the game. The present module is designed for the 4-players version of Mineo which has various objectives, namely victory points or game points (‘Giochi’ in italian) and it allows various aids or automations in the declaration phases, thanks to specific tiles to be played, and in the final point counting phase. However, with a few small operational adjustments it can be used to play the other 4-players versions (Tortorici and Calatafimi), entrusting the declaration phase to the use of the chat.

Retrieved from "https://vassalengine.org/w/index.php?title=Module:Sicilian_Tarot&oldid=63956"
Categories:
This page was last edited on 5 December 2020, at 23:23.
Content is available under Creative Commons Attribution-ShareAlike unless otherwise noted.
This page has been accessed 569 times.
Privacy policy
About Vassal
Disclaimers