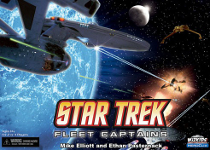 
Star Trek: Fleet Captains, designed for two to six players, is set in the "Prime Universe" of STAR TREK. Each player begins play with a fleet of ships and starts at opposite ends of an unexplored sector of space. This sector of space is represented by hexegonal cards (which are shuffled before play and placed face-down in a pre-determined pattern). As each ship progresses through the sector, you turn the tiles face up, revealing what is in that part of the sector (a Class-M planet, a Class-J Nebula, empty space, etc...). Hopefully you will discover and acquire resources while simultaneously denying them to your opponent(s).

Retrieved from "https://vassalengine.org/w/index.php?title=Module:Star_Trek:_Fleet_Captains&oldid=62134"
Categories:
This page was last edited on 26 July 2020, at 21:06.
Content is available under Creative Commons Attribution-ShareAlike unless otherwise noted.
This page has been accessed 1,282 times.
Privacy policy
About Vassal
Disclaimers